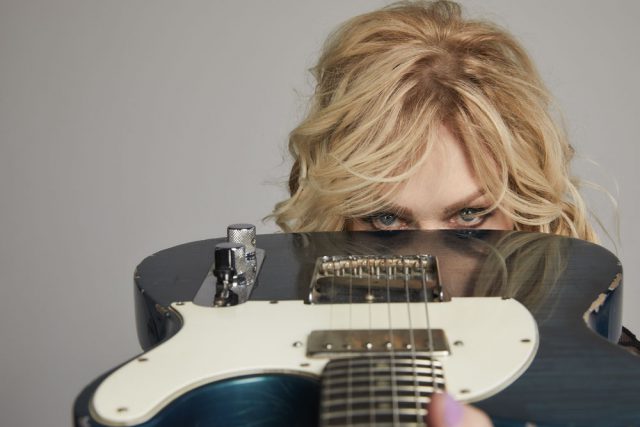 The northwest is of course full of iconic figures that have contributed greatly to the world of music, some of those icons are no longer with us but others are still here and still making great music. Certainly one of the biggest (and most important) has to be Heart, not only because of the volumes of timeless material they recorded but that the ladies did it in a man’s world. Nancy Wilson along with her sister Ann blazed trails that opened up new opportunities for female rockers that rarely existed before Heart came along and while the future of that band is unknown, thast doesn’t matter, we are living in the present.

In our recent interview, Nancy Wilson and I didn’t talk too much about Heart though, we focused more on her new band called Roadcase Royale, a project that she’s very excited about. And there’s plenty to be excited about. They landed a opening spot for Bob Seger’s tour playing to packed arenas around the country. That and a fantastic new album that revisits a few Heart tunes with powerhouse female vocalist Liv Warfield putting her stamp on the tunes but also plenty of new material. It’s clear that Wilson loves being in this band, loves what Warfield brings to the table and is having a lot of fun getting back out there. If you haven’t heard Roadcase Royale yet, here’s the Spotify link.

Nancy Wilson will be in Seattle with her new band Roadcase Royale on November 11 opening up for Bob Seger & and the Silver Bullet Band. Get ticket information HERE.

Nancy Wilson: Hey Glen, how are you doing?

NWMS: I am doing awesome, Nancy, how about yourself?

NW: Pretty good, just having the day off – my throat’s a little raspy, so forgive me. We’ve been touring and touring.

NWMS: A day off? Where are you at?

NWMS: Haven’t been there but lived in St. Louis for one year, and actually saw Heart there. In ’89 I think.

NW: Oh, jeez, wow. Where were we playing?

NWMS: It was in a park. It was either ’89 or ’90 because I was there for a year. I’ve been a fan forever. I’ve seen Heart a bunch of times. Always one of my favorites. And thank you for all the years of wonderful music that you put out. It’s been an amazing ride.

NW: Well thanks for saying that. You know, it’s always nice to hear that it means something for people because we put a lot into it for a long time, and it’s a good thing. Doing music is ultimately a really good thing for a lot of reasons.

NWMS: Hey, so a couple years ago, I was one of the lucky people who was there for the Kiss The Sky benefit at the EMP. How cool was it to sing with Graham Nash?

NW: Oh, my god. That was really fun and really cool. What a guy. What a great icon, too, you know for us, growing up with Crosby, Stills, Nash & Young, all those amazing singer-songwriters.

NWMS: Getting to sing the CSN songs was pretty awesome, right?

NW: Oh gosh, for sure. We didn’t need to learn those. Didn’t have to hardly practice.

NWMS: That’s awesome. So the new album, I love the new album by the way – it’s really great. And Liv, obviously she can really sing. I’ve known a little bit about her because of her time in Portland, but I’m just curious – how did it all come about with you and her getting together in a band?

NW: Well, I know her experience in Portland – she was at Portland State, as was I many years earlier, but I guess she was the karaoke queen of Portland. A lot of her friends actually wanted her to send in a video of her singing Gimme Shelter. She said, “No, don’t send the video of me singing Gimme Shelter to Prince, whatever you do. He’ll never call.” But he did. So anyway, we saw her on TV on the Jimmy Fallon show when she was still Prince’s protégé, and we were just mesmerized with her ability, her energy, her poise, her presence. We were looking for an opener for these two shows at the Hollywood Bowl for Heart, and so we asked her and her guitar player, and her band then called Blackbird to come and open for us. Two nights, and they did, and we really hit it off, and started talking about music. She was more interested in doing more rock type music and not R&B type stuff. She said, “Can I send you some of our songs?” and when I heard her stuff, I was ready to talk, you know? We started talking more and we got together with my three guys from Heart, or two of them, and we started instantly making good music, together. There’s a song on the album called “Hold Onto My Hand”, which was the only one we didn’t actually write. It was by Colin Hay from Men At Work.

NW: Well I heard it on my Pandora, an acoustic version with just him and one guitar, and I was just really taken by the song. I figured, well, if we’re gonna learn an existing song, this has got really amazing words and a simple structure, we could probably make it our own. And I had some ideas for the arrangement, and we did it almost immediately. We were like, “Okay, we can do this, and drums do this, add harmonies on these parts, and bring guitar in over there,” you know. So we all just instinctively came together like we’d already been in a band for a long time. It was kinda true – everyone in this band now is really well acquainted – with touring, with studio work, writing, producing, and playing. So it’s such a natural fit – everyone brings a lot to the table as writers and producers. That’s where it all started.

NWMS: The band definitely gelled quick. I’ve watched a lot of videos as well, and it looks like a blast live. What was the process like with making this album, compared to doing it with Heart?

NW: Everyone’s so prolific on so many levels in this band, and we treat this band as a democracy where everyone gets a vote. You know, if somebody doesn’t like this part of this song, we’re gonna find a way to fix it together. With Heart it was much more like Ann and myself were the leaders, and although we had a little help writing some of the songs, we were always kind of the front people, the leaders, the decision makers, the captains of the ship, steering the ship. In this band, it’s actually more effortless as a musician, as a songwriter, producer, player in a band, because everyone’s pitching in on an equal level.

NWMS: That takes some of the pressure off you though, right?

NW: Yeah, well, there’re not all doing interviews here. The transition is coming out of Heart into this new musical space for me. I can help translate from that world into this one probably the best, because I’ve straddled them both now.

NWMS: What kind of advice you have for female musicians that are looking to have a career in music these days?

NW: Well, I’d say if you’re burning up with passion and you’re ready to fail, then do it. It’s never gonna be, even these days moreso, gonna be handed to you, so you’re gonna have to work super hard, and be resilient, and keep your humor on. The more times you trip and fall, the hardships do arise, you have to keep going. You have to pull up your boots and march.

NWMS: Back to the album, the song “The Dragon”, when I listen to it, I can totally sense Layne. How fond are you of the way the song turned out on the album?

NW: I really love how it turned out a lot. It was a haunting song for a long time, and never finished. One day my hairstylist said, “what about that song, the dragon?” It was really a cool rock song, so when I got with Roadcase Royale, it turned out to be – it was destined to be a Roadcase Royale song. And Dan the bass player, was able to find a bridge for me that finally completed the song. The confounded bridge I could never find.

NWMS: Speaking of that confounded bridge – my buddy Tal Bachman had this idea that you and Ann should team up with Jimmy Page, John Paul Jones and Jason Bonham to do a tour called I Heart Zeppelin.

NWMS: How exciting is it to have your band opening up for Seger?

NW: Oh man, it is way exciting. Seger’s band is incredible and I couldn’t think of better match ever than with our two bands. So many of his songs are timeless classics. We were offered the tour for Heart initially but Ann said no and we were like well that’s too bad, that would have been lucrative for Heart but she just wasn’t into that idea. So I said what about Roadcase Royale? And they said no, we need to sell tickets. I said well at least just check out our stuff. Bob and his manager Punch Andrews, who by the way, has the best name in rock & roll came back and said, on second thought why don’t you come and open for us on this big tour. We said okay, I think we can manage to that. We are doing a lot of Heart songs, about half of our 45 minute set is Heart material – which Liv just slays by the way. It’s a lot of fun to be out there in front of 10-15 thousand people doing this stuff.

NWMS: What is the biggest issue facing us as a society right now?

NW: Right now I would say flood relief is needed bad right now, people are dying out there. So that’s the first thing right now and I think secondly I think people that are trying to be controlling A-Holes should go away.