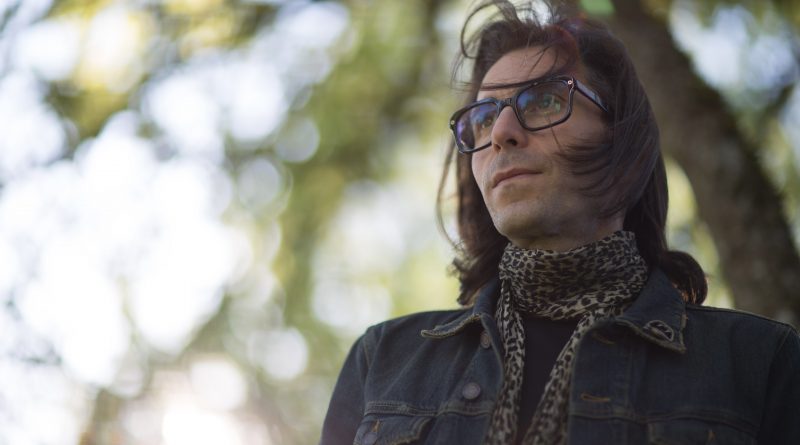 The retro/neo synth-pop band Blue Glass, masterminded by local musician Michael Shunk, celebrates the release of its debut album Pale Mirror with a show at Slim’s Last Chance Saloon, on Friday, May 24th.  Mastermind Shunk was kind enough to take some questions.

NWMS:  Are you originally from Seattle? If not, where did you grow up and when did you arrive here?

Michael Shunk:  No, not originally from Seattle. I grew up quite a few places, big and small, as my family moved a lot. I spent most of my youth in the midwest and most of my 20s in California. I moved to Seattle about 15 years ago, though, so I’ve been here quite a fair amount of my life.

NWMS:  How does Seattle’s music scene compare and contrast with other music scenes you’ve checked out?

Michael Shunk:  Seattle’s music scene has changed so much in the 15 years I’ve been a part of it–and it’s the longest scene I’ve ever been involved in. In the beginning it seemed very cohesive and vibrant.

My first show in Seattle was a “surprise” Mudhoney show at the old Sunset in the late ‘90s, and so much about that show is a good summary of the scene at that time–crowded, lively, raucous, accessible and energetic. I had just come from Oakland and SF where there was plenty going on (especially in the West Oakland warehouse scene) but there was less cohesion, less camaraderie and more struggle to be in a band than in Seattle. I remember being impressed and energized by Seattle’s blue-collar ethic and openness, and it reminded me a lot of Chicago and other Midwestern city scenes I’d first started playing in.

Today, Seattle’s scene seems to be much more stratified and the venues are less accessible–it’s harder to find your footing–but, I think you could say this about many cities these days, it seems to be the way things have evolved. I think we’re more like SF now in that regard but Seattle is still turning out incredible bands, of course.

NWMS:  What music was most important to you growing up, and why?

Michael Shunk:  Formatively, my first crush on music was the Beach Boys. The song “Don’t Worry Baby” absolutely blew my mind when I was about 9 or 10.

I always loved pop music and I discovered The Cure at a pretty young age when I was living in the middle of nowhere in Nebraska. I had no idea where they were from or what they looked like, but I think Head on the Door had just come out and a babysitter or an older neighborhood kid played it for me and I was enthralled.

I remember heading straight down to the Musicland in the mall to buy it and they had no Cure albums–they said I could look in the catalog and order some so I just picked three albums randomly, which were Seventeen Seconds, Faith, and Pornography.

Those albums changed my life, they were so exotic-sounding to me, I’d never heard anything like it. I ended up ordering the rest of their stuff over the next few months, I was obsessed. From there I discovered other similar stuff (I think Cocteau Twins were next) but The Cure were still ground zero for me when I started thinking about picking up an instrument later on.

NWMS:  What other musical projects did you work before ordaining Blue Glass?

Michael Shunk:  I’ve been in a lot of bands over the years but most-recently I have been playing in Transient Songs the past 10 years or so. It’s quite different from Blue Glass but it’s been a great band to play in. Great friends there and we made some good songs – I believe we might have one more in us but we’ll see…

Michael Shunk:  Yes, that’s true–the album was recorded and mixed on tape and it has an intentional early ‘80s reference point in terms of it’s use of analog synths and analog chorus/flanger effects. It’s a very particular starting point that’s rooted in UK indie bands of that late ‘70s/early ‘80s era.

In some ways it’s a bit of a love letter to those early Cure records made, say, up to about ‘83. The mixing and drum miking is a really important part of that sound as well, and, for example, is quite different from the stereotypical ‘80s sounds you often hear on the bigger pop/rock records. All in all it’s a darker, tighter sound that is dry but still atmospheric.

Aside from The Cure I’m a big fan of 80s bands like Japan, Orange Juice, Josef K, Woo, Durutti Column, Felt, Prefab Sprout, OMD, The Wake…honestly, I could list a thousand others! I think I love this stuff because a lot of the records were a great mixture of art and experimentation, pop songs with a great mix of rawness and energy pressed through some darker filters.

NWMS:  Which instruments did you play on this album?

Michael Shunk:  I played everything but the bass guitar and the drum kit. Aside from those instruments, the album features guitars, analog synths, piano, a Rhodes and a Bass VI.

NWMS:  Who plays with you, and which parts?

Michael Shunk:  For bringing the recording to life, I was not! Two good friends of mine came in to assist –Tim Bulkley flew up from the Bay Area to play the drum kit and Jordan Fuller played the bass guitar (he’s also a member of local band The Hollers).

Michael Shunk:  Same two chaps, the current live band for our record release will be the same one that was in the studio.

NWMS:  Which songs on the album are your favorites, and why?

Michael Shunk:  I like “Incantations” because it’s short and energetic and it’s more distorted guitar than I usually prefer, but it is always fun to play and always catches me by surprise for some reason.

I like “All Night” for a similar reason, it’s just a bit of a different song than I would normally write.

“Sleep” is probably the most Cure-ish sounding song on the record and I really like the drum and cymbal sounds we got on that one and on “We Loved the Rain.”

NWMS:  Do the songs come together to form an overall concept?

Michael Shunk:  Yeah, the concept and influences for the record are incorporated into the individual songs and I hope I achieved some cohesion, there:  Isolation and loss, loneliness and longing. The title Pale Mirror refers to a lack of reflection, or a lack of response, externally and internally and that theme is threaded throughout. Additionally, the cover art was commissioned and painted by my friend Mel Prest for the record based on the concept as well.

NWMS:  What’s in the future after the record release?

Michael Shunk:  Well, hopefully some more local shows throughout the summer, and I’m planning on a west coast tour come fall. My goal is to put together a group of locals to play a bunch and explore the songs a bit more before heading back into the studio sometime in 2020!