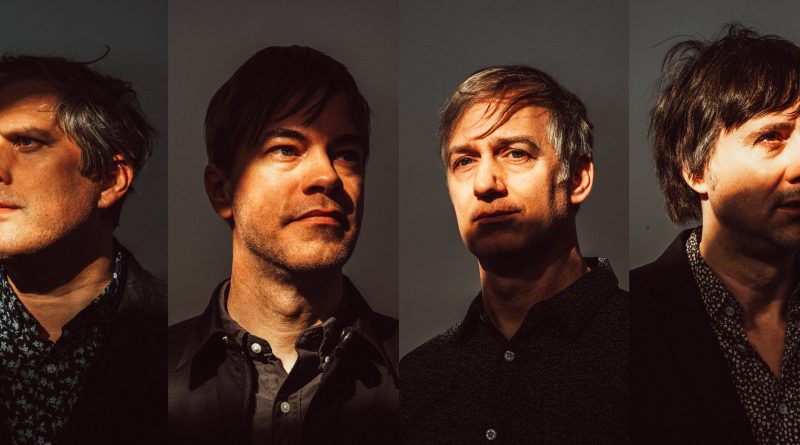 Teenage wunderkinds The Ocean Blue came in on the tail end of the ’80s and waved that decade goodbye with humor, charm, and deeply-resonating wistfulness.  They’re back with a new album Kings and Queens / Knaves and Thieves, and they’re bringing it to the Crocodile on Thursday, June 27th. Guitarist David Schelzel was kind enough to take some questions.

NWMS:  What are your best, worst, and oddest stories from playing Seattle before?

David Schelzel:  We meet a young Ben and Chris of Death Cab for Cutie after one of our shows in the 90s, and it was great to see them go on to big things…

NWMS:  What are your best, worst, and oddest stories from playing live around the world?

David Schelzel:  Signing with Sire Records as teenagers (see below)

Our first van was a retired Sears appliance van that gave up the ghost on the way to our first gig in Philly.

We played our first single on Club MTV with Downtown Julie Brown who didn’t know quite what to make of us.

We supported many great bands over the years, like Tears for Fears, Psychedelic Furs and every one of the Talking Heads (separately).

Being on Conan O’Brien and freaking out right before we walked on stage when the cameraman told us how many people would be watching.

Our tour of Denmark was nearly perfect in every way and inspired a song.

Our last show in Paraguay was nearly perfect in every way and inspired a song.

NWMS:  You were only teenagers when you inked your first big record deal. What did that feel like?

David Schelzel:  It felt amazing. That was the record label we wanted to be on. So many of our favorite bands were on that label, and we had tremendous support and enthusiasm from Seymour the president on down. It was great to do our first three records there.

What do you wish you’d known back then that you didn’t?

How lucky we were, and how much the record business was going to change in a few short years. I think we could have taken advantage more of the opportunities that came with being on Sire/Warner Bros. We passed on a lot of things that in retrospect would have helped us even more over the long term…

NWMS:  What were your most pivotal musical influences, and why?

David Schelzel:  Early on, U2 because they were young, friends and idealist, and the Edge’s guitar playing was about the haunting sound and well-placed simple notes. The band’s music was powerful and simple.

Shortly after, the Smiths, REM and New Order top the list but so many that are a part of our “DNA”. Love each band for different reasons, but together they are the music we fell in love with and influenced the band.

NWMS:  How has the band’s songwriting grown and changed over the years?

David Schelzel:  Lyrically, it’s tracked with me growing from a teenager to a middle-aged guy. Musically, I don’t think we’ve strayed too far from that DNA that defines us. But this record feels like the heaviest and most mature record we’ve done, both lyrically and musically.

NWMS:  You were one of the last big sensations of that chaotic decade, the ’80s. What were your favorite and least-favorite things about the ’80s?  What do you miss the most, and why?

David Schelzel:  I think the 80s (which were probably 83-91 for most of us) was a great decade musically. I love the wide range of sounds and styles that made up the musical landscape. I really don’t think of it as a decade defined by a sound, and I think the current climate is kind of like that. For bands and me as a guitar player, it was nice not to have to be loud or a guitar wizard or fit into a certain mold. You could be yourself. You could be somebody else.

I liked how MTV was a kind of national radio station that featured new and interesting music, particularly 120 Minutes. Bands were on late night shows. Record stores were a place of discovery. Underground college radio and later the Modern Rock/Alternative commercial radio was great. The thing I miss the most about the 80s personally is my youth 😉

NWMS:  What are your favorite songs on the new one, and why?

David Schelzel:  It’s a bit like asking a parent who their favorite child is. But I like “Kings and Queens” as a song that sums up the themes of the record and the way it turned out musically. It feels like we accomplished something in that song we’ve never done before. I like “All the Way Blue” as a quintessential song. I like “Love Doesn’t Make It Easy on Us,” again because it feels like we realized something new on that one, particularly with the dialog in the vocals I’m having with Allison and Charlotte. I like closing the record with “Frozen,” probably the most raw and open song I’ve ever done.

David Schelzel:  We are playing a tour in slow motion, with a 2-4 dates every month for the foreseeable future. But I write and record all the time, so hopefully, there will be a new album in another few years.