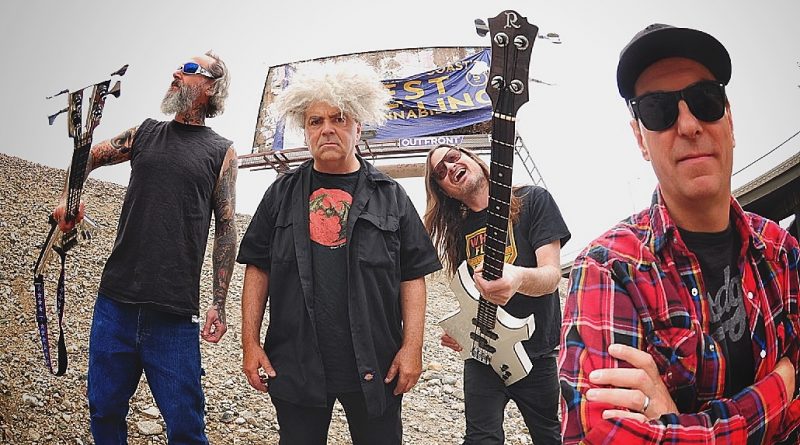 By the time Buzz Osborne decided to leave Washington in the late eighties, he and his band The Melvins, had already cemented their legacy in northwest music history. Although the ensuing Seattle musical explosion would happen after he and his band had already started over in California, he is a man with no regrets about getting away. After over three decades as a band, The Melvins are at the top of their game, enjoying a great deal of popularity and as prolific as ever and also making some of the best music of their storied career. Osborne isn’t a guy though that sits around thinking much about what kind of impact he’s had on the world of music, he’s too busy with the business at hand, which includes a brand new album and shows to play. He prefers to leave that to others to think about.

You can catch the Melvins at Neumos on July 19, Wonder Ballroom in Portland on the 20th or catch them the following day in Vancouver, BC at Venue Nightclub.  We recently caught up with Buzz while he was in Kansas City getting ready to play a show later that night. Here’s how it went:

NWMS: Let’s talk about The Beatles cover you did on the new album, which is great by the way. Whose idea was it?

Buzz: It was my idea. The cover is similar to the way The Moving Sidewalks did it in the late sixties. It’s similar to that and that’s where we got the idea to do the song that way. It’s not exactly the same, but that idea. That cover gave the idea for the cover. It’s a cover of a cover.

NWMS: You are a big Beatles fan I take it?

Buzz: Oh yeah, always. I don’t trust anybody that isn’t.

NWMS: I run into them every once in a while but I don’t trust them either.

Buzz: Fuck no, they gotta be out of their mind. It’s like all the music that they made, you can’t find one thing?

NWMS: Any plans for interesting covers like that in the future?

Buzz: Oh, who knows? Those aren’t the kind of things you plan out too much. It just sort of happens. That’s the whole plan, the whole idea, the whole everything.

NWMS: A lot of fans that associate The Melvins with the heavy, sludgy sound might be a little surprised by this album?

Buzz: They haven’t listened to any of our records the last 25 years then. I mean, you know, they can think that, but that’s just for people who haven’t actually listened to our records. It’s easy for them to say it but it just isn’t true.

NWMS: Your sound has been all over the map. Not that you haven’t had heavier stuff on recent albums but  weren’t necessarily built around that sound.

Buzz: We built…we’ve recorded all kinds of songs, all kinds of things. All different types of music. There’s nothing we can do, you know. People either see it or don’t.

NWMS: What comes to mind when you hear the word grunge? A fashion statement? Clothing line? Genre descriptor?

Buzz: Oh nothing much. Not too much. It really doesn’t mean much to me. I don’t get rabidly obsessed or anything or super excited, you know. It’s like – yeah, yeah, yeah, okay, you know. I’m honestly too busy worrying about the business at hand than to worry about something of that nature.

NWMS: I’ve never considered the word grunge to be a very accurate genre tag because of the wide variety of sounds in the northwest.

Buzz: I’m not an expert on what all those bands sound like, either. By no means.

NWMS: I know you are busy constantly looking forward but does the legacy of The Melvins ever enter your mind?

Buzz: I don’t worry about it too much. I guess it’s just part of the whole thing, but it’s not my main motivation for what I’m doing. I don’t spend time thinking about what the legacy is going to be. It doesn’t mean a whole lot to me.

NWMS: Whether you buy into or not though, you have to know that you influenced a hell of a lot of people.

Buzz: I understand that, and I don’t have any problem with that. I buy into it certainly, I just don’t spend a lot of time thinking about it. I don’t struggle for it and it’s not a big deal to me. We don’t even really have to make records at all. We make records because we feel like it, that’s it, not because it’s something we have to do. It’s part of the deal. We’re musicians and we make records, it’s what we do. We play live and we make albums. How we operate, that’s where we’re comfortable. We’re not done with that. When we will be, I have no idea. Who knows when we’ll be done, I don’t know.

NWMS: If you HAD to describe your sound, how would you describe it?

NWMS: We mentioned the new album earlier, plans for another already?

Buzz: Well, we had a double album that came out last July, A Walk with Love & Death, this new one came out recently, in April. Then we have our A Walk With Love and Death movie coming out in time for the next round of touring. That’s about it for the moment. That’s a lot in one year.

Buzz: We’re done at the moment, but it won’t be long.

Buzz: The guys at Boner Recoreds gave it to me and it just stuck.

NWMS: Besides golfing, what other non-music related activities keep you busy?

Buzz: Read and watch movies – those are the two big ones and I do some writing. Golfing and playing music. That’s a full schedule right there.

NWMS: Most and least favorite part of the music business?

Buzz: Well it’s the thing I do, so I like that part of it. Not every day is fun, some days are worse than others but generally it’s fine. I don’t go along with the typical rock ‘n’ roll life style, you know, how bands normally operate in that upper echelon of consumer wannabe rock stars? I’m not a big fan of that. Our band doesn’t have anything to do with that sort of thing. I don’t really have any way of relating to it. It’s not for me. I don’t enjoy those kinds of things.

NWMS: Compare the music industry now to when you started.

NWMS: You left the northwest before the big explosion, was that because you thought your music had a better chance somewhere else?

Buzz: No, it had nothing to do with that. Nothing to do with me wanting to get out… Maybe it was like a self-proving thing. Proving I could start over and have it work. In a whole new environment and I never regretted it. You know, some bands did well with it. I don’t know. I never felt part of any scene. I like a lot of people who are involved with a lot of that stuff like the Mudhoney guys, Mark and Steve I liked a great deal, I liked the guys from Soundgarden a great deal but as far as the rest of it, I never gave a fuck about it. Without the benefit of any of that stuff, we did fine, started completely over and actually had a pretty easy time doing it.

NWMS: Hard to say what would have happened had you stayed, your sound wasn’t exactly a commercially accepted sound at the time.

Buzz: There’s no way of knowing that. No way of predicting that sort of thing. I never had any faith in it happening but I just always made music that I liked. I operated in a way that I felt was right. That’s it. I mean, I don’t have any idea what anyone wants or what would sell. I don’t understand why stuff sells. I usually don’t hear what people are hearing today. Once in a while I agree with the masses, and yes that particular song’s really good, but by and large there has never been a time that I thought that the masses were right about almost any of this shit. I don’t do it trying to be perverse, it’s just how it works. I don’t know why.