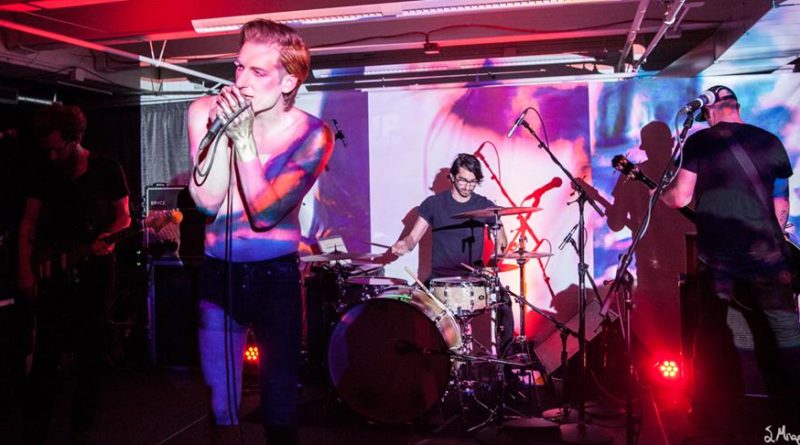 We recently had a chance to chat with Joe Gregory while on the road touring the West Coast in support of his record Gold Teeth + Glass Eyes.  The band is making its way back to Seattle for a hometown show at the Crocodile on June 24th and you should all be there.  The soul of J GRGRY rushes out through the art of combining dark pop tunes along with the strong artistic visuals in their live performances.  This is one of the most anticipated local artist events in June and it is for sure worth checking out.

NWMS:  Where am I catching you at the moment?

Joe: We’re in the van driving over to San Diego

NWMS:  Where did you grow up?

Joe: Born and raised in Seattle, started my first band there at 15, released a 7″ locally which got some traction on 107.7 with Battle of the Bands.  As an early musician in Seattle it was very exciting and fell in love with the whole environment of it then.

NWMS: What was the name of the band?

Joe: Dolour was the name and I was playing bass in that band.  I decided I wanted to sing though and I sat down at my piano at home and I started teaching myself how to sing.  I moved down to Sacramento and I worked with a band there, booking my own venues, immersing myself with the music culture which turned into a deal with Geffen Records. I spent the next seven or so years making music but they never ended up putting out those records.

NWMS: What made you decide to move back home?

Joe: I went through a bit of a bad period after the third label didn’t work out, so I moved back home trying figure out how to reconcile this passion that I have for making music after so many disappointments and frustrations occurred.  By a very happy chance encounter I reconnected with my dear friend Robert Cheek, who is the guitarist in the band and engineer producer, and we just started working on this record.  It came back with such a passion and I realized that I don’t need anyone else to put it out, we could do that on our own and be in control of the process the way we want.  It’s so liberating to be free of that, to be on the road now having fun and making music.

NWMS: It’s so good to hear that, sounds like you went through some tough times but looks like because of that you ended up where you need to be right now.

Joe: Totally, it’s easy to say that now that I’m on the other side of that dark tunnel but looking back at that, I wouldn’t be able to connect with my voice and music the way that I’m connected right now, without all those horrible things happening to me.  I have this rich understanding and deep appreciation for what we’re doing.  I couldn’t even listed to music those five years because of all the disappointments let alone make it, but now that I feel I have this opportunity again I’m cherishing every moment of it.

NWMS: How did music influence your early life?

Joe: I played saxophone in school band, then the bass which evolved and I taught myself piano and guitar.  It all happened very organically and this is how the band is now.  I went from instrument to instrument and it is part of the songwriting now. I incorporate whatever I’m feeling at the moment into the songs.

NWMS: What drew you to music? Did you choose it or did it choose you?

Joe:  That’s interesting, I do really feel that it was a universal thing. I was playing sports and doing things young people do and then basically before I even played a rock instrument I was asked to be in a band.  I told them I didn’t even have a bass or an amp and by the end of the first practice I was leading the band.  It just felt that it was exactly what I was supposed to be doing.

NWMS: Are you self-releasing your music now?

Joe: When I approached Robert to work on the record it was under the understanding that we would do it on our own.  Even if people were interested in coming in and working with us we felt that we had done that before and we wanted to try it our way this time.  It was so great having that freedom to do what we wanted with the songs, especially after almost a decade of having so many restraints. It was such a debilitating system to work under and now that we don’t have that it is total purity, to make this music, make this record, go out on the road with it and that it’s ours and nobody else has a say in it.

NWMS: How many shows have you already played?

Joe: Tonight’s our fifth show before we head to the Bay area for a couple live shows there.

NWMS: How does the creative process work for you? Are you writing on the road?

Joe: Yes, I write all the time, either by making notes to myself or just starter ideas.  Then when I actually have time to completely turn off everything and get away, preferably to some coastal setting that is isolated, I have some sacred kind of space to allow the songs to talk to me.  They are already there and I’m trying to tap into what they are really saying to create.  I try to limit any outside influences or distractions and honestly I feel that the songs write themselves.  It happens fairly fast and I think it’s because of all the prep that already exists before I even sit down with a guitar or the piano.

NWMS: How do you feel about the Seattle music scene right now?

Joe: I feel that there a lot going on and I’m pretty stoked about it.  I had a really good time at Upstream Festival, they had so many local artists, which they treated so well, and they incorporated these non-traditional venues in Pioneer Square.  To be bringing people down there in those volumes beyond sports events is so cool.  It gives young bands that are just starting out the goal of being part of something so great in their own city.  Also it’s great because you learn about all these other bands that are doing so well.

Joe: I love so much of it, right now I have my dog with me, he’s sitting on my lap, as we’re looking out at the ocean.  That alone is amazing, I really love my band and crew, these are people I would hang out with regardless and that makes it super special.  Bonding with your friends on the road and meeting new people while putting on the show you want is special and exciting.

NWMS: What is the hardest?

Joe: Probably eating right and sleeping, those things are so foundational for stress and anxiety.  When you’re travelling there are always hiccups, bumps and things that just happen.  As long as you know that, it’s not that big of a deal.  There are always things that will happen but at the end of the day we’re together, healthy, happy, and we’re playing music.  There isn’t really anything that bad about touring, it’s all perspective.

NWMS: Do you have any interesting hobbies outside of music?

Joe: Out of what I can think of I really like languages so I study Italian on my free time.  It’s like a puzzle and for me very mentally engaging. Linguistics are very interesting to me and it’s something I like to dig into when I’m not thinking of music.

(Check out the new album below via Bandcamp and get more info about the June 24th show at The Crocodile HERE.)