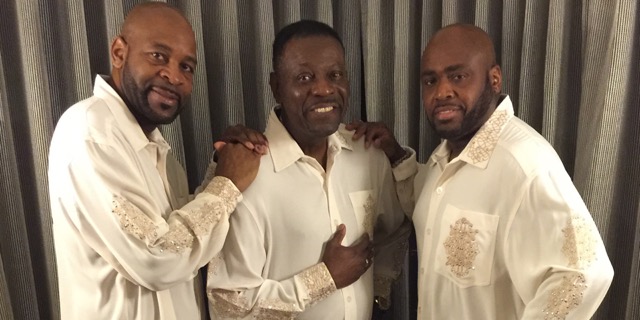 The Delfonics owe some, though not all, of their bankability, to Quentin Tarantino, who deftly placed their old hits “La-La (Means I Love You” and “Didn’t I (Blow Your Mind This Time” in his 1997 feature Jackie Brown.  Greg Hill, second tenor in the Delfonics featuring Greg Hill, admits that more than one version of the group exists, but his edition features himself, naturally; Benny “Primetime” Daniels (lead tenor); and Tommy Moore (second Second Tenor), plus their backing band.

They play Jazz Alley on Tuesday, April 30th, and Wednesday, May 1st. A busy fellow, Mr. Hill finally called up to answer some trans-continental queries.

NWMS:  Hello, good to hear from you at last!

NWMS:  Are you in New York City now?

Greg Hill:  Yeah, we just got back from Florida.

NWMS:  How is Westchester today?

Greg Hill:  A little rainy.  On and off, you know?

NWMS:  How long have you been doing this Delfonics thing?

Greg Hill:  I was with the original group for about sixteen years.  And since I left, with The Delfonics featuring Greg Hill, we’ve been going about thirteen questions.

NWMS:  All those years out on the road, what are your best, worst, and strangest stories?

Greg Hill:  Well one of the best stories was when we did the PBS special [“Soul Legends”].  Everybody knows the songs, they sing the songs along with you, and it’s such a good feeling.  Sometimes you get in front of an audience and they act like they don’t know who you are or what you singin’, you know?  (laughs)

One of the worst stories, worst, but, funny…y’know, I’m a city boy.  I don’t really like bugs and whatnot.  I don’t do the bug thing.  So we was in St. Thomas, and to this day, I don’t know what that was, that flew and sat on my shoulder, but I damn near jumped off the stage.  That thing was so big, you know?

NWMS:  The size of a bat or something?

Greg Hill:  Yeah, to this day I don’t know what it was.  All I know is it was big, and it just sat right on my shoulder and I just couldn’t believe it.  At the time, worst, but now that I look back on it I gotta laugh.

Strangest… (thinks) you ever heard of Yaweh? We do quite a few dates, with the Yahweh people.  And my first time doin’ a date with them, I didn’t even know what it was.  All I know is, we just had a booking.  With some people from Yaweh.  I didn’t really look into it.

And so, we got there, they took us through these strange twists and turns, and they had a leader, like a king or whatever.  And it was the strangest thing, he had security around him, like meetin’ the President or something.  And I found that really really strange.  But it is what it is.

We didn’t know what we were doin’!  Under the hotel, around these turns, then we went in this little room, the guy was sittin’ in the chair like the king.  But wanted to meet us.  And ever since then we been okay.

NWMS:  Gets the crowd moving…

Greg Hill:  They love, it because we let the crowd sing along.  Good clean music, you know?

NWMS:  What’s your least-favorite song in the set?  Does one song feel like a chore?

Greg Hill:  Yes, yes!  I could not stand that song.  Seemed too slow.  It took a couple of years for me to appreciate that song, that was not one of my favorites.  But I’m cool with it now.

NWMS:  Do people still mention the Quentin Tarantino movies, after all these years?

Greg Hill:  Oh yeah, they mention that.  They mention the Quentin Tarantino movies, you know we did a track with Rick Ross.  They ask me what the experience was like.  It was a good situation but that was one of the reasons I ended up leaving the original group.  Some people are stuck in a time zone, they’re stuck in an era, and they’re not willing to evolve.

We did the track, but he was supposed to do some dates with us.  And they didn’t want to be associated with a hip-hop artist.

NWMS:  That was why you left the original group?

One of many reasons.  Two brothers fighting over money, one brother tryin’ to stop the other one from workin’.  Let me put it this way, they was fightin’ over money that I wasn’t ever gonna see.  Okay?  So, why should I be caught in the middle of that?