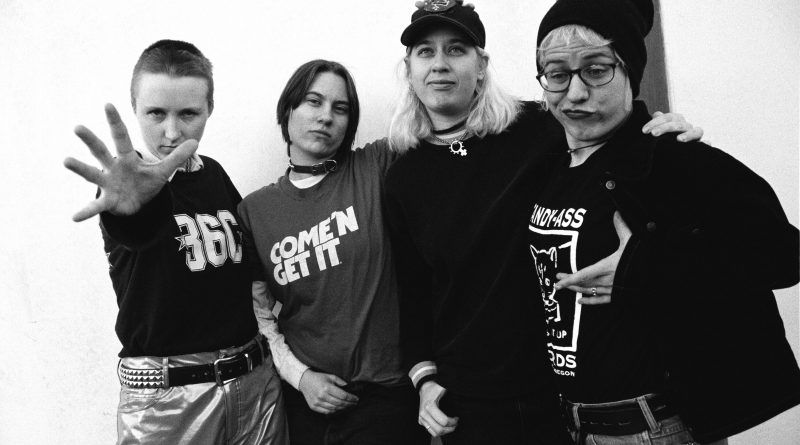 Coming out blazing from Olympia with honesty, vulnerability, humor, and punky chops, Team Dresch, a crew of out-and-proud lesbians, stuck around long enough to bequeath the world the Personal Best album and the Captain My Captain album, great stuff solid through, before fragmenting.  They’re back now with reissues of the above plus an album of rarities (Choices, Chances, Changes), and a quintet lineup of Donna Dresch (bass), plus four alums from the past—guitarists Jody Bleyle and Kaia Wilson; plus drummers Marcéo Martinez and Melissa York. They’ll hit Seattle’s Clock-Out Lounge on Friday, June 7th for a sold-out show, followed by a tour down the West Coast.  Donna Dresch herself was kind enough to take questions.

NWMS:  Did you do all of your growing up in Olympia?  If not, what other places did you call home?

Donna Dresch:  I’m a Navy brat, which means we moved around a lot.  Mostly we stuck to the I-5 corridor,  So I say I grew up on I-5 and landed in Olympia during my last year of high school.

Landing in Olympia made me the luckiest person in the world. Olympia is where I grew up into a functioning human.

I was always obsessed with music but never thought it was possible for me to be in a band.  My friend Eric Greenwalt (Christdriver, Subvert) asked me to form a band with him and for some reason I said yes, not knowing how to play a note, and that was just the right push in the direction I needed to go.

NWMS:  Growing up queer in a small town must have been tough.  How did you manage your coming out?  Did you have any help from anyone?

Donna Dresch:  Growing up I told myself “Just deal with this when you are 18,” so most of my youth was just waiting ‘til I could be grown up.

I didn’t need to do that much coming out after that because apparently I look really gay.

The older gays of Olympia swept me up under their wing and took care of me. They knew who I was before I could say it. They gave me a job at the best place in the world. (The Smithfield Cafe, where every punk and queer and freaky person hung out), took me to my first gay pride march (accidentally ended up on the cover of the Seattle Times before I had come out to anyone) and just accepted me.

Olympia may be a small town but it’s (largely) a progressive hippie college town. So again, I was pretty lucky.

NWMS:  How did you form Team Dresch, and what was its original lineup?

Donna Dresch:  Brady [Smith] from Hazel is a good friend of mine… Jody [Bleyle] plays drums in Hazel, Brady introduced us and we hit it off right away. We spent the night talking about how we wanted to be in this specific kind of band that didn’t exist, so we must do it.

We were both in contact with Kaia Wilson (she and I were pen pals) and somehow we three were a band (it’s hard to remember 25-year-old details!).

Jody on drums, me bass, Kaia guitar. Pretty quickly we realized we needed a drummer so Jody could stand up to sing. Scott [Plouf] from the Spinanes joined us and then we convinced Marcéo [Martinez] to join us!

(25 years of memories again, the details are lost on me. Other teammates have better memories.)

NWMS:  How did the lineups grow and change over the years?

Donna Dresch:  After Personal Best, Marcéo went off to do other bands (Vegas Beat, La Grenuda).

We had met Melissa [York] on tour and we had never seen someone hit so hard and play with such passion like that and we were so excited she said yes when we asked her to join.

NWMS:  What were your initial impressions of punk culture and queer culture as you started to play, and then toured?  How did those impressions grow and change over time?

Donna Dresch:  It was definitely a struggle between “Am I punk or am I gay?” At the time the two cultures didn’t mix that often. Punk wasn’t queer enough and gay culture was full of clones and “normal” acting people.

Fortunately, I wasn’t the only one struggling with this. Through ‘zines and shows we all started to gravitate toward each other and create our own community. (Later it would be called Homocore or Queercore, but labels never do anything justice).

NWMS:  What are your best and worst experiences from touring?

Donna Dresch:  Worst: Getting beat up after our first show.

Best: the Homo-a-Gogo show in 2004. We have played some amazing shows before and since but that particular show was a special moment where we had worked out our problems from the breakup. We had grown a lot, we played better, we loved each other more, could communicate better and we could have fun.

Donna Dresch:  The Deep South is beautiful. There are scary places everywhere.  But everywhere also has amazing pockets of awesomeness and the South is no different.

If you are ever in a strange place you know you can go to a punk show and at least find one person to talk to. No matter where you are. Or a food co-op. You can always find something at any food co-op. Hang out by the bulletin board.

NWMS:  What lead to the band’s breakup, and why have you brought it back?

Donna Dresch:  I think a lot of it [the breakup] had to do with the fact that Jody and I instantly started dating the second we met and then eventually realized that we probably should have just stuck to the band thing. So we broke up while still going full force band stuff.

There was a lot of good and bad energy smashing around and Kaia and Melissa decided to go off and start the Butchies.

What brought it back was time. We all just needed some time. To grow up, all the things they tell you to do in therapy, we did that stuff.

NWMS:  Where do the tracks on Choices, Chances, Changes come from?

Donna Dresch:  It is a compilation of all of our singles and songs on compilations.

Donna Dresch:  It was a long-running joke with us that if you were in a strange town and saw a bar called “choices” or “chances” or “changes” it was a good bet that it was a gay bar.

Before the E-Room, there was a dyke bar in Portland called Choices in the basement of the building on the NW corner of SE 29th and Stark. The door is still there on the side of the building. It was across the street from Starky’s which was an old gay bar. To feel the old gayness, stand on 29th on the north side of Stark Street.

NWMS:  Did you have any all-time favorite queer bars? If so, which, and where, and why?

Donna Dresch:  There was a bar in San Francisco called Maude’s.  It was a tiny dive that was almost impossible to find because the door to get in was covered in ivy. I feel like it was leftover from Stonewall era times where our gathering spots needed to be hidden and secret. I always felt cool knowing how to get in.

But my favorite “bars” are the DIY gathering spots and events Like Not Enough festival in Portland, where a group of queers didn’t see enough representation reflected in the scene, so they started this festival for new bands and collaborative art. They rented a giant warehouse and set up a bar, everything was DIY, punk vibes and community-centered. Those kind of event spaces are life-giving.

NWMS:  Who’s in the new lineup, and how did you pick them?

Donna Dresch:  It’s all the same!  We have five members. It works out having two drummers.  Sometimes Marcéo can’t do a thing and Melissa can and vice versa.

NWMS:  What’s in the future for Team Dresch?  A new album?  More shows?

Donna Dresch:  Working on it!

And lots of shows coming up!!