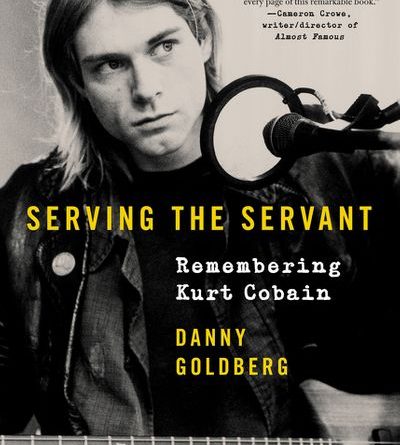 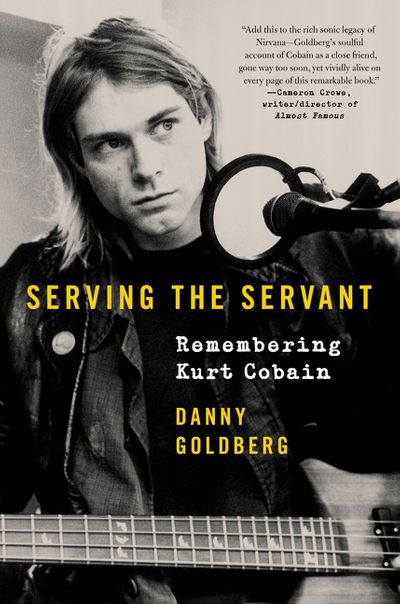 Danny Goldberg, who took over Nirvana’s management in 1991 and saw the band and Kurt Cobain to the top, always refused to talk at length about those days. Until now. His new memoir Serving the Servant: Remembering Kurt Cobain covers everything Goldberg recalls from those mind-boggling years, bolstered with vintage documents and the memories of others on that ride.

Goldberg appears in Seattle to discuss his book on Thursday, April 18th, at the Neptune Theater, joined by Cobain biographer Charles Cross, and grunge DJ Marco Collins, who helped break Nirvana and Nevermind to the world.  He was kind enough to take a few questions

NWMS:  What were your first impressions of Kurt Cobain, and in what important ways did your impressions change over time?

Danny Goldberg:  Although Kurt was soft-spoken, it quickly became clear to me that he was the decision maker in Nirvana both about all creative issues as well as business decisions. Despite many dramas that he had to contend with over the next three years, I always found that he had crystalline clarity about artistic decisions no matter what else he was going through, and it seemed to me that he defined “Art” as including every aspect of his career, including songwriting, and singing, recording and performing as well as the design of album cover artwork, story-boarding and editing of videos, the way he approached every interview and even what tee-shirt he wore when photographed.

Personal issues were more confusing for him and obviously the fact that he struggled with an attraction to heroin didn’t help.  However, notwithstanding his ups and downs, in his relationships with people around him he was usually thoughtful and kind. One of the most striking things about interviewing people for the book was the amount of deep affection those who knew him still retain for him and the number of stories about his thoughtfulness.

Most of the time when I think of him I recall a bemused expression that indicated that he was three steps ahead of most people he was talking to (including me) but was, at the same time, warm and generous.

NWMS:  What impressions did you get of Cobain’s creative process?  How much time did you spend with Nirvana in the studio, and any favorite stories from that?

Danny Goldberg:  It seemed to me that Kurt was in a creative mode most of the time. If he wasn’t working on a song, he’d be doing a drawing or a sculpture or editing a video.

I didn’t personally spend much time in the studio but in my research for the book I did talk to Butch Vig, producer of Nevermind; Scott Litt. who mixed the singles on In Utero and who produced the Unplugged recording; and to Krist Novoselic, for their recollections of the recordings. In general, Kurt knew what he wanted, prepared extensively for recording and had no trouble making decisions in the studio.

NWMS:  What about Cobain would surprise the person on the street the most?

Danny Goldberg:  Although he has an image of a slacker and a stoner, Kurt had a fierce work ethic when it came to his art. Before Nevermind, the band rehearsed eight hours a day with almost no distractions for many weeks to nail down every nuance of the arrangements.

He was clear about the role he wanted to play in the world, as a re-definer of masculinity. He had strong political views which had been nurtured and reinforced by his time in Olympia around the Riot Grrrl culture. He detested racism, homophobia, misogyny and amoral materialism. However, Kurt was no anarchist. He made it clear that he voted for Jerry Brown in the Democratic primaries 1992 and for Bill Clinton in the general election.

At the same time, Kurt often reminded me that he was also wary of become too political. He greatly admired The Dead Kennedys and Fugazi but he didn’t want Nirvana to have as polemic an image as those bands did. And he wanted to convey a sense of humor and love for music, punk rock as well as pop melody and he straddled those agendas consciously and carefully.

NWMS:  What are the most commonly misunderstood things about Cobain, and why, do you think?

Danny Goldberg:  Kurt’s death was so tragic and grotesque that a general media impression developed over the years that, in my opinion, over-emphasized his dark sides and under-emphasized his brilliance and sweetness.

One of my main goals in writing Serving The Servant is to paint a portrait of Kurt that emphasizes his creativity and kindness. It’s a persona memoir, not an autobiography, and I don’t claim that it, or any book, can convey all of the aspects of Kurt—he was an extremely complex person—but I hope it adds focus to aspects of him that I think have become a bit obscured in the media space over the last decade.

NWMS:  Where were you when you got the sad news?  Is there anything substantial, worthwhile, we can take from the sad story to make life better?

Danny Goldberg:  By April of 1994 I had left my management company and gone to work for Atlantic Records ,and become President of the label. However in my arrangement with the company it was agreed that I would continue to provide management services for Nirvana, which mostly meant being there for Kurt when he wanted me involved.

On April 8th, the day his body was found, I was in a meeting with Steve Nicks about a future solo album when my wife at the time, Rosemary Carroll, called and said it was urgent. She told me the awful news.

It’s important to recognize that nothing good comes from the use of heroin. In the vast majority of cases people either stop using (usually, though not always, with the help of a 12 step program), or they die.

I also think it’s important to cherish and remember and support artistic brilliance, to recognize the sensitivity of artists and nurture and love them as much as possible and recognize the significance of life as much as death.