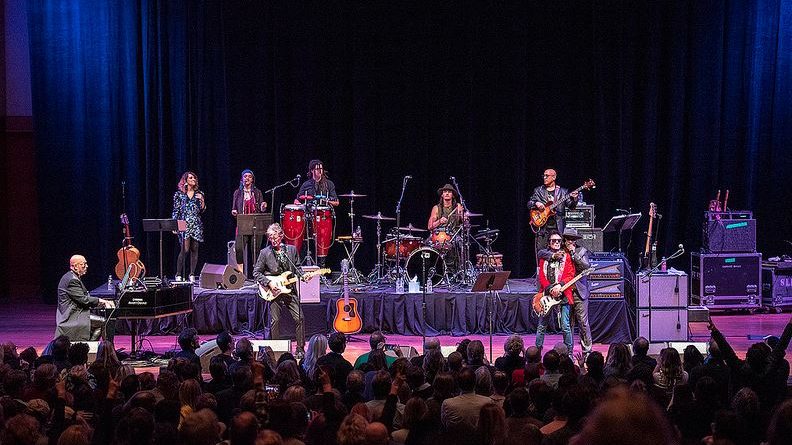 “Look up here, I’m in heaven.” These lines from David Bowie’s “Lazarus,” a song on his final album, Blackstar, were perfectly apt during this night of music in tribute to Bowie’s creations. But “A Bowie Celebration: The David Bowie Alumni Tour” also had a direct connection to the man as well. The show’s subtitle refers to the fact that the musicians aren’t just admirers, they themselves worked with Bowie over the years, giving the production a more personal touch.

The “Alumni” tour pulled into the Seattle last Friday, February 15, drawing Bowie-o-philes to Benaroya Hall’s S. Mark Taper Foundation Auditorium. Admittedly rather staid surroundings for a rock ‘n’ roll show, though it did mean the acoustics were great. And when the band burst into their second number, “Rebel Rebel,” some in the audience just couldn’t help themselves, and rushed down the aisles to dance away down front. The ushers waited, like indulgent parents, giving the kiddies their moment of fun; they were then dispatched down front to politely shoo everyone back to their seats.

Still, despite the formal setting, the show had a relaxed quality that made it feel more like a club gig than a concert. Keyboardist Mike Garson (whose time with Bowie goes back to the Ziggy Stardust days), served as an MC, from behind his keyboard, introducing the rotating cast. Musicians and singers change during the course of the tour, as does the set list, adding to the informal feel. Also on hand in Seattle were Earl Slick, who looked the most like a rock star, in his red jacket and neck scarves, and Charlie Sexton, whose gaunt appearance made him look like an emaciated Bowie — something that was especially eerie when he performed “Space Oddity.”

It would’ve been easy to take the more crowd-pleasing option of doing a Bowie show consisting of nothing but his greatest hits. But along with “Fame,” “Ashes to Ashes,” “Young Americans,” and “Diamond Dogs,” there were also plenty of album cuts: “Five Years” (Ziggy Stardust), “Candidate” (Diamond Dogs), “Stay” (Station to Station), and “Slip Away” (Heathen) among them. There were some nice surprises, like “All the Young Dudes” (written by Bowie, but a hit for Mott the Hoople), and “Under Pressure” (Bowie’s hit collaboration with Queen). There was even an excursion into Bowie’s own fandom. Singer Gaby Moreno performed “Wild is the Wind,” because Bowie had loved Nina Simone’s version of the song. It was a nice, well-rounded mix of material, giving you a greater appreciation for the scope of Bowie’s work.

Bernard Fowler (best known for his work with Rolling Stones), was another of the show’s singers, opening the show with a grand “Bring Me the Disco King” and striking a note of Thin White Duke cool in his natty suit and hat. Corey Glover (a founding member of Living Colour) was on hand too, displaying quite a penchant for hitting the high notes. “That was very high!” Garson observed about Glover’s vocal calisthenics in “Young Americans.” “I think my dog in LA heard that!” He also took advantage of his cordless mic to run through the audience during “Suffragette City” (we high-fived each other as he rushed past my seat).

Though not a sell out crowd, the audience was enthusiastic throughout, singing along on cue (“I’m happy, hope you’re happy too…”), and getting the clap-claps in the right place in “Space Oddity.” Once “Suffragette City” got most of the crowd back up on their feet, they were even allowed to go down front for the encore, which concluded with hands-in-the-air singing to “Heroes.” A fitting end to a warm and bittersweet show.