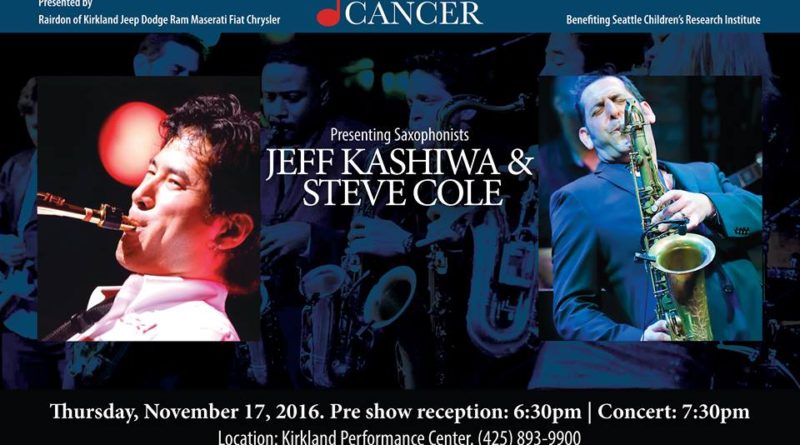 Two of the world’s most acclaimed saxophonists, Jeff Kashiwa and Steve Cole, are set to headline the fifth annual In Concert for Cancer event at the Kirkland Performance Center on Thursday, November 17th, 2016. Seattle native Jeff Kashiwa became known as one of the most compelling saxophonists in contemporary jazz during his first year with The Rippingtons in 1989. Jeff has released 9 solo CDs and has spent 28 years touring and performing all over the world. Chicago native Steve Cole exploded onto the scene in 1998. With catchy Billboard-charting hits, he has become one of the most celebrated players in contemporary jazz, releasing 9 solo CDs to date. Kashiwa and Cole are founding member of Sax Pack, an all-star sax combo consisting of rotating members Jeff Kashiwa, Kim Waters, Jackiem Joyner and Marcus Anderson

As one of the nation’s top pediatric research centers, Seattle Children’s Research Institute is dedicated to making breakthrough discoveries that help prevent, treat and eliminate childhood disease. Seattle Children’s Research Institute, is pioneering groundbreaking, lifesaving cancer treatments that use the immune system to eliminate cancer, without chemotherapy or radiation, working to cure childhood cancer with minimal side effects and improve survivor’s quality of life.

Tickets to the event vary in price, and are available for purchase via kpcenter.org. For more information regarding the event and its history, consult inconcertforcancer.org.