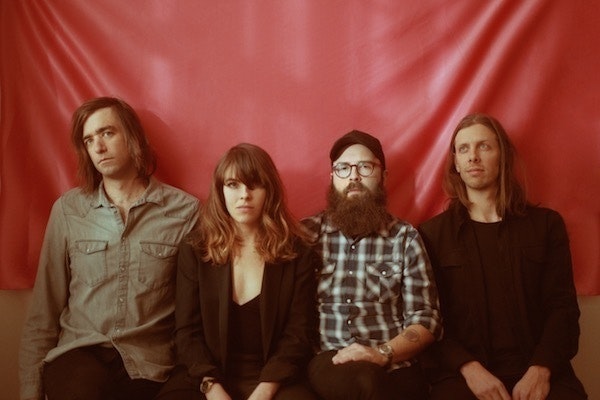 Frances Quinlan has been meditating a lot on power. “When I was younger, I kept thinking that one day I would have a partner and that person would give me power,” she says. “That never came to be.” Instead, what Quinlan, the songwriter, lead vocalist, and rhythm guitarist of Hop Along, has found is that “power has an inherent awfulness to it and people who have it tend to be disappointing in how they wield it.” In this particular moment in history, this thought begs a greater question: what do we do with power and the men who so freely brandish it? “I’m angry that I believed in this false idea for so long, that a man would come along and show me what I was worth.”

This theme propels the Philadelphia-based band’s third studio record, Bark Your Head Off, Dog. Written over the course of 2016 and 2017 and recorded in the summer of the latter year by Quinlan, Tyler Long (bass), Joe Reinhart (guitar), and Mark Quinlan (drums), the album imagines what it’s like to cast off longheld perceptions, often without being certain about the new ones that will replace them. Much like on Hop Along’s first and second records, Get Disowned and Painted Shut, Quinlan seeks in real time to work through these emotions. On Bark Your Head Off, Dog, she also grasps at something more complicated. “Growing up I was constantly in my head and not a part of the world,” she says. “Now I’m trying to force myself into the world.”

Tickets to the show are available at the door, or online via EventBrite.