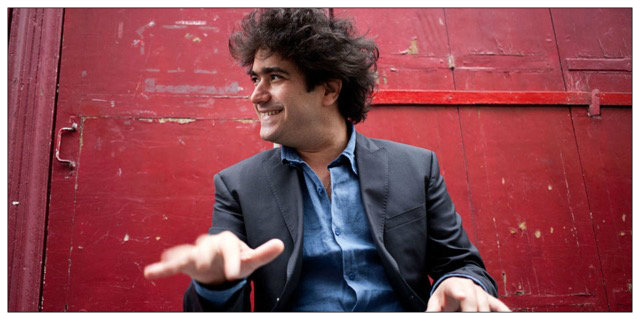 Havana based composer and pianist HAROLD LÓPEZ-NUSSA is a musician whose musical voice is now being heard around the world. El Viaje (The Journey), López-Nusa’s recent debut release on Mack Avenue Records, visits many genres of music and travels smoothly between Harold’s classical, native and jazz inspirations. Soon after release, the album reached No. 1 on iTunes Jazz Chart and No. 2 on Amazon’s Jazz Chart. The recording features The Harold López-Nussa Trio with younger brother Ruy López-Nussa on drums and percussion, himself a star in the distinguished López-Nussa Family of renowned Cuban musicians. Recent performances at The Montreux, Monterey, Montreal and Tokyo Jazz Festivals; The Kennedy Center; and The San Francisco Jazz Center have fortifed Harold’s reputation as a profound musician of rising stature who has fully integrated his classical training and love of the jazz continuum with his Cuban roots and soul.

“Pianist Harold López-Nussa is the latest in a line of extraordinary keyboardists to emerge from Cuba.” – DownBeat

“El Viaje (The Journey),” the title track of Cuban pianist and composer HAROLD LÓPEZ NUSSA’s debut release on Mack Avenue Records, seems to sway gently like a boat in the water–as if readying for a voyage or returning to port after arrival-trumpet and voices whispering memories. This scene aptly describes López-Nussa’s experiences of traveling throughout the world, yet always finding his way back to his hometown of Havana, Cuba. This journey of body and spirit has led simultaneously to a musical exploration where he visits various genres and ideas while staying true to his foundational roots.

The release of López-Nussa’s music stateside is a significant postscript to President Obama’s recent trip to Havana. The conservatory-trained pianist is the first Cuba-based musician (he has dual citizenship in both Cuba and France) to release an album internationally since the lifting of many of the restrictions associated with the longstanding trade embargo. States Mack Avenue Records President Denny Stilwell, “Harold follows in the modern day tradition of exemplary Cuban pianists who have recorded and toured internationally. We feel he is an emerging artist with immense creative potential to breakthrough.”

López-Nussa has moved with ease between the classical, popular and jazz music worlds. A quick look at his experiences reveal a recording of Heitor Villa-Lobos´ “Fourth Piano Concerto” with Cuba’s National Symphony Orchestra (2003) but also winning the First Prize and Audience Prize of the Jazz Solo Piano Competition at the Montreux Jazz Festival, Switzerland, in 2005. He was part of projects as diverse as Ninety Miles (a recording with David Sánchez, Christian Scott and Stefon Harris) and Esencial (an album of compositions by revered Cuban classical guitarist, composer and conductor Leo Brouwer), both in 2011.

As for his popular music and on-the-job training, he was part of projects such as the Cuba volume of Rhythms del Mundo, which paired him with veterans from Buena Vista Social Club and he spent three years in the touring band of singer Omara Portuondo, an opportunity he calls “a blessing.” He has distilled all those experiences not only into a rich, personal style, as a player and composer, but it infused López-Nussa with an engaging attitude about making and sharing music.