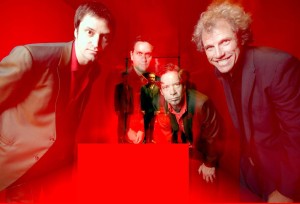 For their darkly shaded and radiant debut album, HÆLOS have found their blues where others go to find pure, uncut joy: the dancefloor. The London-based trio, comprised of Arthur Delaney, Dom Goldsmith and Lotti Benardout, spent 2015 honed up in their studio writing and producing a fully realized album that perfectly encapsulates the band’s philosophy. Full Circle is set for a March 18th release on Matador Records. With a shadowy electronic sound that recalls trip hop greats like Massive Attack and Portishead, HÆLOS is an up-and-comer with a lot of appeal in the underground music scene.

Already armed with an incredibly impressive live set, HÆLOS are ready to make their North American live debut. They’ll play select West Coast cities in January, followed by SXSW, New York and Coachella. During their brief, selective West Coast string of shows, the trio will be making a stop at the Sunset Tavern in Seattle. The 21+ show is set to take place on January 27th.

You can find a full list of the band’s upcoming dates below. Click on the Seattle date to be redirected to where you can find ticket information. You can listen to the band’s latest single, “Oracle,” below.