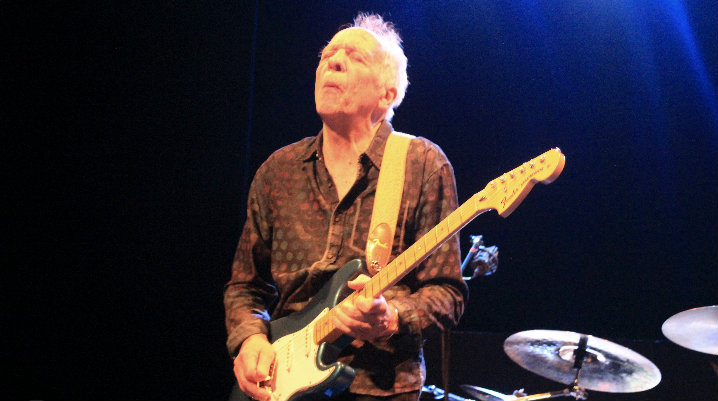 Robin Trower (born Robin Leonard Trower, 9 March 1945, Catford, South East London, England) is an English rock guitarist who achieved success with Procol Harum during the 1960s, and then again as the bandleader of his own power trio. Trower grew up in the seaside resort of Southend-on-Sea, Essex. In 1962, Trower formed a group that became The Paramounts, later including fellow Southend High School pupil Gary Brooker. The Paramounts disbanded in 1966 to pursue individual projects. During this time, Trower created a local three-piece band called ‘The Jam’ – not to be confused with the later group with Paul Weller. Trower then joined Brooker’s new band Procol Harum in 1967, with whom he remained until 1972.

Before launching his own eponymous band, he joined singer Frankie Miller, bass player James Dewar, and former Jethro Tull drummer Clive Bunker to form the short-lived combo Jude. This outfit did not record and soon split up. Trower retained as his bassist Dewar, who Trower retained as his bassist Dewar, who took on lead vocals as well, and recruited drummer Reg Isidore (later replaced by Bill Lordan) to form the Robin Trower Band in 1973.

Trower continued his work with Procul Harum for a number of years, touring and playing notable shows, such as the Isle of Wight festival and an opening slot on a Jimi Hendrix tour. After releasing five albums with the band, he left to start his own project, “The Robin Trower Band” in 1973.

With a new band came a new sound, and many of the band’s early albums were recognized for their Hendrix influenced style, most notably 1974’s “Bridge of Sighs”. The Robin Trower Band has released 19 studio albums since 1973, plus collaborative albums with the likes of Bryan Ferry and Jack Bruce. The band’s 2013 effort, Roots and Branches, proved to the blues and rock world that he still had plenty of fire left in him.

Trower is considered by many as an icon in the guitar world, and has influenced man blues and rock ‘n’ roll fans with his signature bends and solos. Trower himself cites James Brown’s ability to merge the two genres as a major influence on him.  Trower will be making three stops in the northwest in June and since we caught him the last time he was in town we can definitely say you don’t want to miss this chance to see a living legend. Ticket info for the June 3rd Seattle show is HERE. You can also get tickets to the June 2nd Portland show HERE and the June 1st Eugene show HERE.