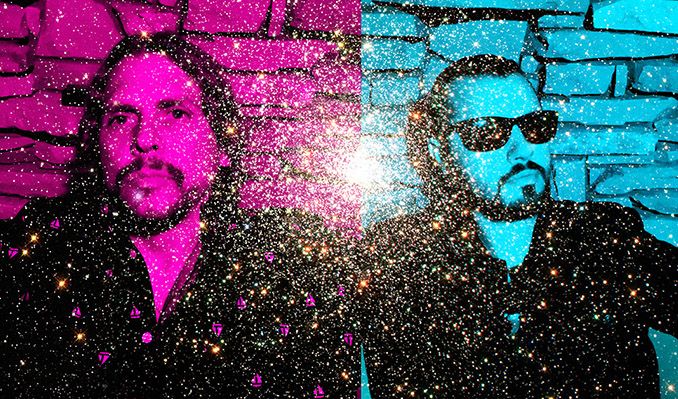 Ghostland Observatory’s entire approach to music – sonically, aesthetically, conceptually – is essentially a melding of the two distinctly different personalities of its two members, Thomas Ross Turner and Aaron Behrens. Whereas Turner, the producer/drummer/keyboardist of the duo, finds solace in the minimal, bleak cable-patch squawks of Karlheinz Stockhausen and the analog-disco-thump of Giorgio Moroder, Behrens’ interests lie more along the lines of psychedelia, rock and various country and blues artists.

The result is a shimmering, pulsing pop music that is at once kinetically alive with Behrens’ striking vocals and driving guitar work but also anchored firmly by Turner’s percussive beats and Moog-generated melodies and hooks. Common descriptions include “electro-dance rock,” “synth-funk” and “Freddie Mercury-helms-Daft Punk.”

Deciding to produce a style of music that as yet existed only in their collective consciousnesses; Behrens and Turner formed Ghostland Observatory in Austin in 2003 and haen’t looked back since. They now sell out prominent venues across the country, have played at Lollapalooza, Bonaroo, Coachella and the Austin City Limits music festival, which they headlined, and continue to play at various music festivals and venues around the globe to an ever increasing fan base, thanks to their now-famous live shows.

Tickets to their upcoming Showbox performance can be found here.