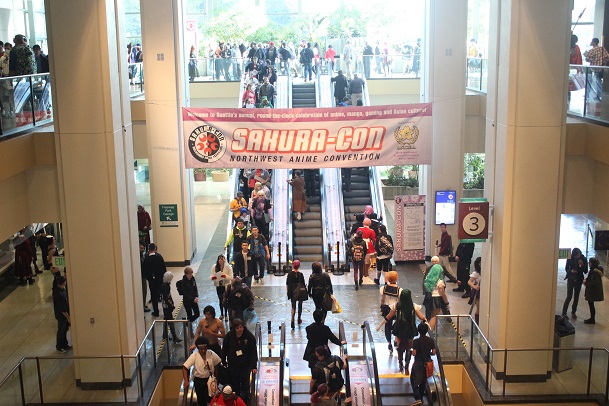 I pride myself on being 100% honest in my written material, so I’d like to start off this review by saying that I am a massive weeaboo piece of shit. For as long as I can remember, I’ve been a pretty sizable anime and Japanese video game enthusiast, and I, like many others my age, had my obligatory embarrassing Japan-worshipping, Gaia Online-addicted, cursing-the-roundness-of-my-eyes phase at around age 8, which persisted for a couple years or so. I’ve since cooled down on my obsession fairly significantly, but I still have a soft spot for the culture. Save for one year, I’ve been going to Seattle’s Sakura-Con, the largest anime convention in the Pacific Northwest, every year since 2009. As such, it’s become somewhat of a tradition for me. My excitement for its nearing only grows more and more with each annual outing, and 2015 yielded perhaps my biggest amount of hype for the annual convention thus far. And with Sakura-Con 2015 gracing us sinning mortals this weekend, I’m happy to report that the convention’s 17th annual iteration did not disappoint.

Sakura-Con’s latest outings have consistently been nothing if not a mecca for whatever is trendy and/or gaining traction in the thriving Internet-based anime- and gaming-obsessed world in any given year, and this presence was especially felt this time around. Established mainstay anime series like Naruto, Death Note, Pokémon, Soul Eater, etc. were all represented via cosplay and general merch as much as they’ve ever been, but contemporaries like Sword Art Online, Kill la Kill, Free! Iwatobi Swim Club, and DRAMAtical Murder proved to be the new hotness this time around, with tonnes of cosplays, merch being bought and sold, as well as numerous fan and industry panels. Surprisingly, Attack on Titan, the anime that at last year’s Sakura-Con was more popular than Jesus, was comparatively hard to come by, and was pretty much just another fandom in the mix. Unsurprisingly, there was next to no Frozen presence this time around, which seems to have been wiped from the collective consciousness Men in Black-style.

Our weekend really got started Friday evening, with a panel that seems to be very quickly becoming the pride of Sakura-Con, “Zapp Brannigan’s Spaceship of Love”. It’s essentially a character panel in which a guy cosplaying as and acting as Zapp Brannigan from Futurama looks for new crewman for his spaceship, so he calls various audience members to the stage to interview them in-character to determine whether or not they’d make good candidates, while other members of the Spaceship of Love crew assist, among them a buff guy cosplaying the Pokémon Bidoof. A handful of games are played towards the latter portion of the panel, and at the end they pick a team of three to become the new crewman. This was my second time attending, and it was just as funny and off the wall as the one last year.

A certain amount of the humour comes from audience members’ answers and comments, which can lead to some considerably awkward silences if the interviewees have the impulsive creativity of a sponge pudding, but what holds the entire panel together is the funny and clever comments and retorts from the Zapp Brannigan actor. Without such an engaged, witty, and quick-minded individual spearheading the panel, it would probably be an unmitigated disaster. Whomever they get to play Zapp Brannigan every year is consistently so into it that it’s hard not to be enamoured. This is one annual Sakura-Con panel that you haven’t lived until you’ve been to at least once. And it seemed like the Zapp’s Spaceship of Love crew were essentially the flagship guests of the con this year, with them hosting three different panels over the three days, as well as being the hosts of the Cosplay Contest on Saturday. Some might see that as being kind of strange considering Futurama is pretty far from anime, but really, you’d be hard-pressed to find a group of people better suited to be figureheads of the con.

For most attendees, Saturday is the best of the three days. It generally has the most interesting panels happening, it tends to be the most attended day, and it brings in the most vendors at the consistently fantastic Exhibitor’s Hall, a selling point in and of itself. But to be honest, the start to my Saturday broke my heart. The Cosplay Skit Contest is an annual tradition for me and my Sakura-Con clique, but the one this year was just outright bad. For starters, it was the shortest I’ve ever been to thus far, at just eight skits long, which is incredibly short when compared to how they’ve been in years’ past. To make matters worse, the skits themselves were, for lack of a better word, boring, with little in the way of creative skit ideas or interesting stage presence. It was just kind of sad to see that the same outlet that once had fantastic and endlessly clever skits like “Sora the Explorer” in 2009 would have a year with nothing worth remembering in it whatsoever, good or bad.

Luckily, though, I was able to bounce back from that disappointment with a couple other happenings throughout the day, such as the pretty entertaining Q&A session with voice actor Vic Mignogna, whom is anime convention royalty at this point. A bigger-name anime convention without Vic Mignogna as a guest is like a piano bar that doesn’t end with “Closing Time”; something just isn’t right. Although, being someone who’s gone to a couple of his Q&A’s in years’ past, it was slightly redundant hearing a couple of the same “So whom has been your favourite character to voice so far?” questions again.

But even then, it was definitely tangible, because Vic has a tonne of charisma and charm, to the point where he could probably have a six-hour Q&A and still leave the audience wanting more of it. While the appeal of sitting in on him babbling and hugging people for an hour and a half may be lost on people whom aren’t fans of some of the anime series he does English voices for like Fullmetal Alchemist and Ouran High School Host Club, as a fan of his work, his panels are always a treat.

Every year Sakura-Con has a special musical guest that they import from overseas to put on a concert on Saturday night. They tend to be musical artists that perform original soundtrack work for anime series that will be popular at the convention. This year they opted to include 2, the first of which was Kanako Itō, a Japanese singer whom has contributed music to various anime series and visual novels, some of which I’m rather fond of, like DRAMAtical Murder and Chaos;Head. Her set was pretty much all J-pop of varying tempos, with some ballad-like songs interspersed with more upbeat anime opening tracks.

With no live musical accompaniment, the spotlight was entirely shone on Kanako Itō’s vocal ability and stage charisma, which was a smart move, because Itō is a supremely talented singer, and she has that certain charm that melts the hearts of con-goers, even though I’m positively sure 99% of the crowd had no clue what she was saying. I had a lot of fun at her set, though I was a bit jarred when the set inexplicably went from J-pop to a song that sounded all for the world like a radio nu-metal song from the early 2000s.

The second performer was one that seemed to have been way more popular amongst the con-goers, a J-pop duo by the name of GARNiDELIA, whose performance on Saturday night was their first ever in the United States. I’m not terribly familiar with their work, but it sure seemed like everyone else at the con was. T-shirts for the band were being worn everywhere, and the Main Stage was packed nearly to capacity with hundreds of excited fans. They got their set started out with “Grilletto”, the second opening to The Irregular at Magic High School.

Like their opener, GARNiDELIA’s lead singer Mai Mizuhashi brought a lot of personality and conviction to the live setting, not to mention fantastic singing, but by comparison, Mizuhashi was leagues more hyped and spontaneous in her stage mannerisms. She brought the expected Japanese idol swagger, while their synth player Yoshinori Abe mostly stayed behind his equipment for the duration of their set. All in all, they sounded great, they performed great, and they did a great job of winning over both me and the crowd, and their set inspired me to check out their recorded material. Good stuff.

The last day was quickly upon us, and my Sakura-Con experience was capped off with my favourite panel I went to all weekend, the third and final Zapp’s Spaceship of Love panel, “Zapp’s Spaceship of Love Presents: Critical Fail! An Interactive D&D Experience”, a non-character panel in which the Spaceship of Love crew selects audience members at random to play Dungeons and Dragons with them, as they follow a story of a group of people trying to survive the con, whilst coming face-to-face with tongue-in-cheek obstacles they must overcome. The key to their take on D&D, though, is that instead of rolling dice to determine whether or not certain things will happen, they instead have to move pieces of a Jenga tower under hindering circumstances, such as being blindfolded or being lifted in the air by another player, and if the tower falls, that player dies.

Unlike the Spaceship of Love panel, which varies in entertainment value depending on how impulsive the chosen ones are, the entertainment from this one comes from the absurdity of the scenarios and the contestants’ ability (or lack thereof) to play the game under these ridiculous conditions. It’s the kind of panel where just about anybody in the audience could come up and greatly entertain the audience. It’s also during this panel that I think the other members of the Spaceship of Love crew get their own time in the limelight, which is great, because they can be just as funny as their leader. All in all, as much as I love the Spaceship of Love panel, I have to give it to “Critical Fail!” for being my panel of the convention.

In summation, despite a couple disappointments, 2015 yielded a pretty great Sakura-Con. This year’s convention was just as fun, inviting, varied, and delightfully tiring as it’s ever been. If you don’t come home from Sakura-Con feeling like you could sleep for a decade straight, you aren’t doing it right. If you find yourself drawn towards any part of neo-nerd/geek culture, be it anime, video games, movies, TV, comics, whatever, Sakura-Con will have something for you, and I recommend you check it out sometime.

(Below are photo galleries of Kanako Itō and GARNiDELIA, as well as one of general pictures taken during the event.)