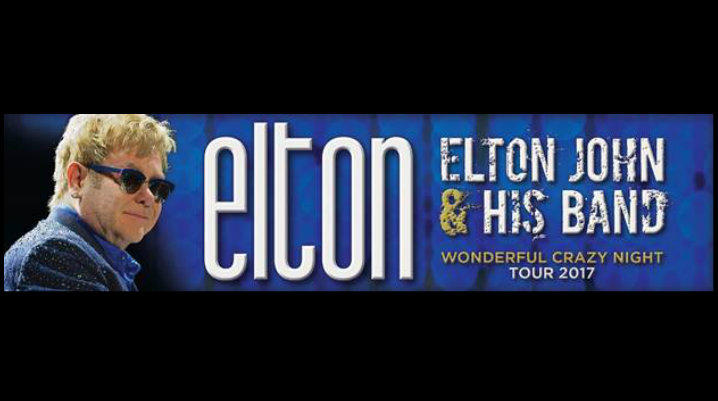 Elton John and his band return to Spokane for one performance at Spokane Arena on Sunday, March 5, 2017 at 8pm as part of a 12-city concert tour that will feature iconic hits and classic album tracks from throughout his incredible five-decade career, as well as selected tracks from his latest release, Wonderful Crazy Night.

“The simple truth is I want to spend more time with my family and less time touring,” said Elton. “I am all too aware of how precious the time ahead is. My sons are growing up so quickly. Their early years are just flying by and I want to be there with them.”

One of the most successful artists on the road today, Elton and his band perform a concert you will never forget: the entire audience singing along to much-loved classic songs such as “Your Song,” “Rocket Man,” “Bennie and the Jets,” “Philadelphia Freedom,” “Crocodile Rock,” “Don’t Let the Sun Go Down on Me,” and many more.

“To say that we are excited about Sir Elton John returning to Spokane is an understatement,” said Spokane Arena GM Matt Gibson. “When we were offered the opportunity to host again, our immediate answer was yes. Sir Elton is a consummate showman; his return to the Inland Northwest will be an event like no other!”

The monumental career of international singer/songwriter and performer Elton John spans five decades. He is one of the top-selling solo artists of all time, with 38 gold records and 31 platinum albums,
29 consecutive Top 40 hits, and he has sold more than 250 million records worldwide. John holds the record for the biggest selling single of all time, “Candle in the Wind ’97,” which sold over 37 million copies. Since launching his first tour in 1970, he has played over 4,000 concerts worldwide in more than 80 countries to his credit.