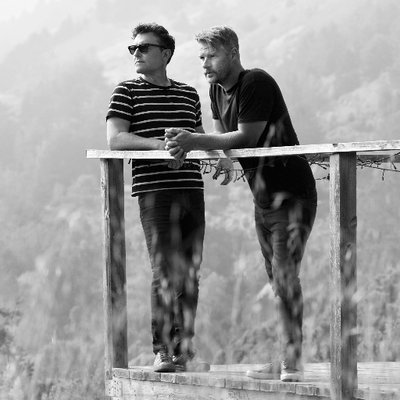 Armed with merely a double-neck bass/guitar, drums and a dizzying array of foot pedals, El Ten Eleven creates complex, deeply felt music, from scratch, onstage, with no help from laptops or additional musicians. Made up of Kristian Dunn (bass, guitar) and Tim Fogarty (Drums), they utilize multiple looping pedals to create songs that sound as though they are being played by at least six people. Most first-timers to an El Ten Eleven show are stunned that the band is a duo. It’s a refreshing site in this age of letting the computers do all the work.

Since the band’s inception in 2002, they have always been just two people who produce their own records. That attitude of self-reliance led to the band launching their own Fake Record Label, where they have self-released 6 full length albums over the past decade plus. For 2018’s Banker’s Hill, the band brought producer Sonny Diperri into the fold and moved up to the beautiful Panoramic House studios in Stinson Beach, CA for a month to create their 7th long-player. The decision to bring another collaborative force onboard has proven well worth the change of process.

“Sonny gave me everything I wanted from a producer. Not only is he a phenomenal engineer, but he helped us arrange and perform our songs in a way that we couldn’t have on our own.” – Dunn

Part of El Ten Eleven’s success has come from tasteful licensing to Film & TV. Their music has been used in everything from Lexus commercials to the MTV Video Music Awards but the most notoriety has come from licensing partnerships with Gary Hustwit’s award-winning design documentary trilogy, “Helvetica,” “Objectified” and “Urbanized.” Featuring both original music from El Ten Eleven and scores from Kristian Dunn, the films’ beautiful precision are a perfect marriage for El Ten Eleven’s meticulously-layered sounds.

The promise of L.A. may well lie in Tennis System, who have thundered their way through their adopted city with a reverb-drenched ferocity that has, in short order, made the East Coast transplants the city’s band to watch.

One listen is all it takes to comprehend why: Tennis System are masters of unhinged, lo-fi psychedelia, laced with the inescapably pop DNA of Jesus and Mary Chain, Nirvana and Ride. Behind the sweat-drenched performances, behind the Orange amps and squalling anthems is a coolly leather-clad trio, composed of front man Matty Taylor, drummer Hector Gomez, and bassist Zach Bilson. Arriving at the current lineup, however, was spirit quest that took Tennis System from one coast to the other: It was in gritty Washington, D.C. that a young Taylor steeped like tea in the music of Fugazi and Bad Brains, Black Tambourine and Nation of Ulysses. He decamped for Los Angeles, where denizens Gomez and Bilson joined the band, propelling the band forward as a full-fledged L.A. band.

Though Tennis System has shared bills with the likes of Ty Segall, Wavves, Japandroids, Pains of Being Pure at Heart, Mark Gardner and Beach Fossils, and worked with Jeff Zeigler of Uniform Recording (Kurt Vile, War on Drugs, Nothing) and Fred Kevorkian (White Stripes, Pavement, Sonic Youth, the National) since its founding in 2009, life on the best coast has only served to raise its profile: In the past year, crowds at Filter Magazine’s Culture Collide festival, Austin Psych Fest, L.A.’s iconic Part-Time Punks showcase and South by Southwest have begun to bear witness to Tennis System’s slash-and-burn live shows.

After 2011’s much blogged-about self-released album, “Teenagers” (and its stunner of a single, “Hey We Tried”), the band returns in the fall of 2014 with “Technicolour Blind,” the appropriately named, heady fever-dream of a new album that has been a year in the making for Tennis System. Its tracks, including “Technicolour Blind” “Memories & Broken Dreams” and the sparkling, anthemic “Dead Honey” are melodic departures from the gritty, fuzz-washed tunes of yore; rather, Los Angeles life, with its thrilling beauty and starkly menacing underbelly, has left Tennis System sun-bleached and wary, and left their music imbued with the peculiar patina of a rough-and-tumble circumstance. The guitars still squeal, but listen closely: Taylor’s lyricism bears unexpected wisdom and woe. Recorded with Ulysses Noriega (The Wedding Present, Ben Folds, The Offspring) mixed by Drew Fisher (The Melvins, Bleached, Babies) and mastered by John Greenham (Ice Cube, Aesop Rock, Chuck Prophet), “Technicolour Blind” is poised to be Tennis System’s breakout effort, even if fans knew it all along.