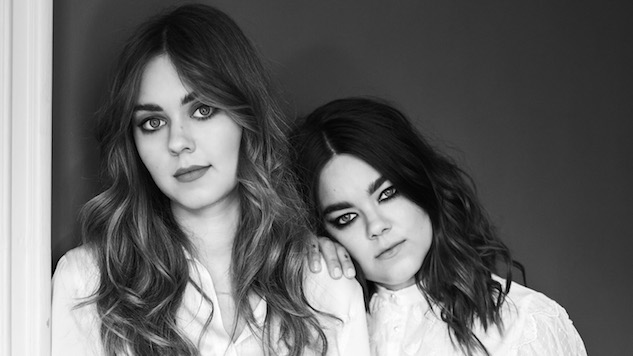 There’s a line in the title track of Ruins that is the most direct the Söderberg sisters have ever been as First Aid Kit. “I lost you, didn’t I?” asks Klara Söderberg. “But first I think I lost myself.” The whole album will take you back to the first time your veins were squeezed to the point of suffocation by that first heartache – the one that left you anchorless, questioning your purpose, your world, yourself.

Klara, the younger sister to her sparring partner Johanna, isn’t sure that she knows when she’s written one of those lines. It’s the facts that pour out of her. “Life just happened and it dictated what the record was about,” she says. “Most of it is the aftermath of a relationship ending, where to go from there, figuring out who you are after that happens. It’s a documentary, and it’s quite sad.” Johanna, however, does know. She acts as the executive producer to Klara’s ideas, identifying the golden moments, telling her which to pursue and how to make them sing. “Johanna puts it all together,” explains Klara. “She knows that it’s good but it needs something else. I’ll argue that it doesn’t. Then we’ll do it, it’ll sound perfect and I’m like, ‘Oh fuck it’s true – it is better now.'”

Tickets to the outfit’s forthcoming Paramount Theatre performance can be found here.