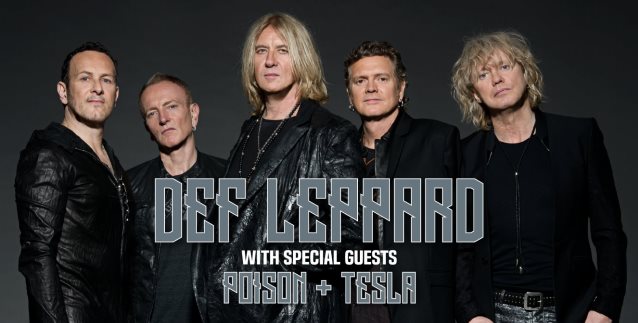 Fresh off winning their fan-voted Classic Rock Magazine Album of the Year award, Def Leppard announce they will return to the road this spring for a three-month run across North America. The Live Nation-promoted outing will storm through cities across parts of the U.S. and Canada. This new leg of dates follows the group’s massive 70+ city 2016 tour and is set to kick off on April 8th in Manchester, NH and wrap on June 25th in Indianapolis, IN. Joining Def Leppard on select dates are Poison and Tesla. Tickets will go on sale on January 20th atLiveNation.com. The Def Leppard Rock Brigade Concert Club presales begin on January 17th, also at LiveNation.com.

Front man Joe Elliott says, “We’re thrilled to be able to take this tour to cities we didn’t play in 2016. The demand for us to return, or rather extend the tour was phenomenal! There’s a great buzz around the band right now, and we’re loving the fact that we can do this with the latest album being so well received.”

In conjunction with the announcement of their North American tour, Def Leppard also premieres the live video for “Animal” via Brave Words. Click here to view; we encourage you to post and share! The live video clip is from the band’s recently announced concert film, And There Will Be A Next Time – Live From Detroit, which will be released on February 10th in partnership with Eagle Rock Entertainment. Click here to purchase.

Guitarist Phil Collen says, “Our last full concert DVD, excluding Viva! Hysteria, was 1987’s In the Round, In Your Face, which was shot on video. We felt an updated version was way overdue so here it is, the brand new Def Leppard concert experience!”

With two prestigious Diamond Awards to their credit, Def Leppard—Joe Elliott, Phil Collen, Vivian Campbell, Rick “Sav” Savage, and Rick Allen—continues to stand tall in the music industry and deliver some of the most iconic rock melodies and memorable anthems of all time. Most recently, their 2015 self-titled album featured singles “Dangerous” and “Let’s Go,” which premiered via RollingStone.com and hit #1 on the Billboard Top Rock Albums Chart.

The tour also marks the first time in over 5 years that Poison will tour with all original members. Members including Bret Michaels, CC DeVille, Bobby Dall, and Rikki Rockett. Poison has sold over 40 million records and is set to perform some of its greatest hits, including “Nothin’ but a Good Time,” “Every Rose Has Its Thorn,” “Talk Dirty to Me,” “Unskinny Bop,” and “Something to Believe In.”

Front man Bret Michaels says, “I could not be more excited. I know all of us will give one thousand percent on stage, and we are looking forward to performing our hits together. I personally could not be more thankful for the three generations of fans, and I love the music of Def Leppard and Tesla. This will be an amazing night of rock and roll. Don’t wait, because god only knows.”