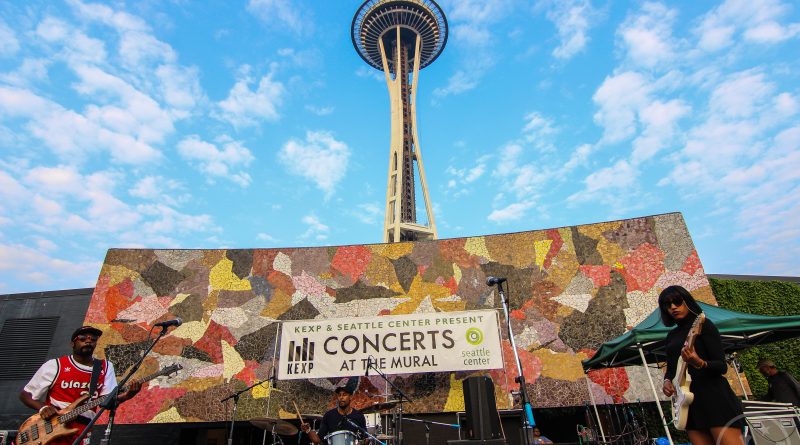 This marks the 12th year of the Concerts at the Mural series, offering four, free, all-ages shows to discover the best of the independent music scene. A partnership between Seattle Center and KEXP presents the series each year. Each show features local and up-and-coming artists alongside national and international acts.

The series kicks off with an all-Canadian showcase, headlined by Montreal-born Wolf Parade, with support from Vancouver’s DUMB and Jock Tears. The second week is headlined by noisy pop-rock act Cherry Glazerr, supported by locals Red Ribbon and Antonioni. On August 16th, headliner Weyes Blood will play the sun down with a set of ethereal psychedelic folk, with local bands Versing and Whitney Ballen supporting. To round out the series, Helado Negro will perform his blend of Latin music with electronic, jazz, psychedelic, and ambient styles, with support from PNW acts NAVVI and PSA.

Seating for Concerts at the Mural is on a first-come basis. Low folding chairs and blankets are welcomed. Large coolers/ice chests, umbrellas, pets, video and audio recorders are not allowed. Come early to get your seats and enjoy the beer/wine garden (for people 21 years of age and older with a valid ID) starting at 5 p.m. Seattle Center Armory food merchants also will be open for food and drink.

The 2019 concert series is subject to change. For concert updates, information and rain arrangements, listen to KEXP 90.3FM, visit www.KEXP.org or www.seattlecenter.com or call 206 684-7200.

Connect to the extraordinary at Seattle Center, a civic, arts and family gathering place in the core of our region. More than 30 cultural, educational, sports and entertainment organizations that reside on the grounds, together with a broad range of public and community programs, create nearly 12,000 events on the 74-acre campus and attract over 12 million visitors each year. At Seattle Center, our purpose is to create exceptional events, experiences and environments that delight and inspire the human spirit to build stronger communities.

KEXP is one of the most influential listener-supported music radio stations in the country. Hundreds of thousands of listeners from around the world tune in to the station each week over the air and online. On KEXP’s YouTube channel, videos of exclusive in-studio performances garner more than 3 million views per week. KEXP produces hundreds of live performances each year from their Seattle Center studios, with many shows open to the public at no charge. For more information, please visit www.kexp.org.