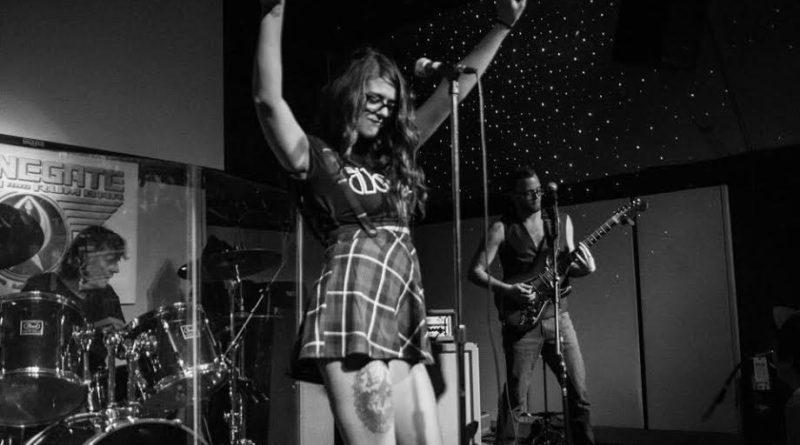 There has been an unexpectedly strong resurgence of local music in Tacoma during the past year. Multiple venues have sprung up and others, like Stonegate Pizza and Bar, have reinvented themselves. The crazy thing is that these spots don’t seem to be competing. Instead, they’ve done a great job growing the music community in general, increasing its headcount on a monthly basis. If you’re on social media, start following the likes of Louie G’s, Jazzbones, The Valley and Real Art Tacoma (apologies to those inadvertently missed) to see the head-spinning activity for yourself. Case in point, Stonegate targeted this night to formally open its SECOND venue, Rock Loft, conveniently located upstairs from the main stage. This should prove to be a differentiator as they could comfortably host 6+ bands a night if they wanted to.

The first band up, amidst a sea of mobile phones in video record mode, was DedElectric. Comprised of Daymon Robert Fritz (lead vocals, supporting guitar), Joe Marzullo (lead guitar, supporting vocals), Graeme Smith (bass) and Ben Frates (drums), DedElectric kept the tentative, yet vocal, crowd moving with a mix of genres – blues, Motown, country and rock – saturated with vocals somewhat reminiscent of Jim Morrison and Bob Seger, powerful and elongated. Every song had a great beat and many involved extended instrumental stretches. This is a band that would improvise all night long if you let them and they’d sound good doing it. Throw in a few “Hell Yeah”’s from the crowd with a mini drum solo and you’ll understand Daymon’s emphatic, mid-set proclamation, “What’s important is that we’re having fun!”

Next in line was Tacoma-based Crossing Crusades. When you watch this Rock (with a capital “R”) band for the first time, you’ll have to reconcile the fact that they formed just a few short months ago. They sound seasoned beyond their time together and have considerable stage chemistry. This 5-piece may have met because of music but it’s apparent they could have been friends under any circumstance. Retten Steincipher (guitar/vocals), Chris Hopkins (lead vocals), Aaron Lee (bass), Sam Thompson (guitar/vocals) and Kevin Ross (drums/vocals) are probably best described as “post rock”. Think of Candlebox (but harder), Live (with more substance) and Tool (but not so f-ing serious), then fast forward 10 years. Songs were genuine and heartfelt. The backline was comfortably tight while Hopkins sang with the raspiness of a true rock and roll road warrior. Their 45-minute set included everything from anthems to horns up party rock. At one point they brought the room lights down and got the crowd to illuminate the Stonegate with their phones for a ballad, something Bret Michaels copied 6 days later at the Showare Center. This is a band on a mission to be both noticed and remembered, confirmed by the loudest cheering of the night.

Last up was local favorite The Madd Hammers. With Stonegate’s own Sam Aiello at the mic, this ragtag group took over the crowd with a series of dreamy alt-rock melodies fused with powerful, captivating vocals. They may have been playing to the home crowd, but The Madd Hammers are a force to be reckoned with due in large part to Aiello’s entrancing vibrato and stage sway. Much of the audience mimicked her stationary dancing while one fan live streamed the whole event. This is an all around skillful bunch who dispensed songs in a way that made you catch your breath. See them if you get the chance, it doesn’t look like they have many shows coming up.

Not to be forgotten, Stonegate also hosted three other bands in its aforementioned sister venue, Rock Loft. Between sets, attendees could head upstairs to a thoughtfully cool space and with a live music floorplan. With semi-transparent window shades, wooden floors with painted flames, flush ceiling speakers and small disco ball to boot, anyone outside would be enticed in and not disappointed by its progressively hip setting.

Jay Man kicked off Rock Loft’s music with a solo acoustic set performed to a handful of friends. He played most of the show with a broad, confident stance, serving up more music than lyrics in a modern Neil Young style. Professor Sweater also played to a small but devoted crowd, capturing Seattle’s flavor of indie with jazzy, lounge-y beats thrown in for fun. Last of the night was Buffalo Buffalo Buffalo, an eclectic foursome who offered intelligent and boppy tunes delivered in dramatic fashion. Catch all of these bands as well when you get the chance.

This was a great night of live local music but an even greater example of talented, accessible music currently in Tacoma. It’s only February so you can’t help but move forward with optimism. Summer events and festivals are being planned so regardless of genre (3 of the 4 Tacoma acts at this year’s Upstream Music Festival are hip hop for example), there will be amazing live entertainment available here at a fraction of the cost. Take advantage of it before the secret gets out.