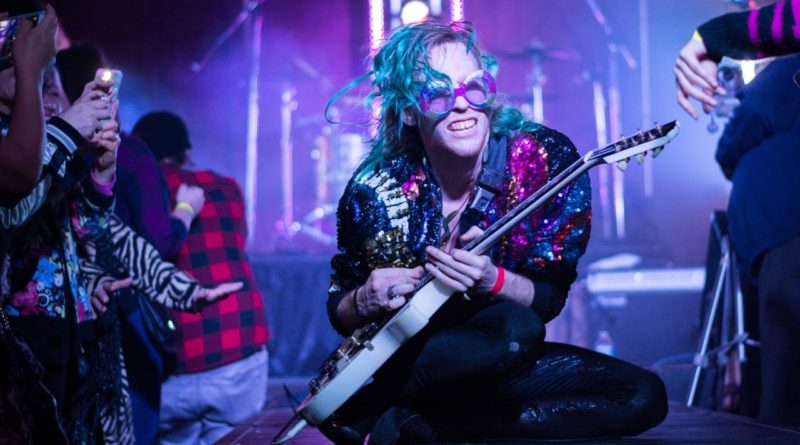 Tacoma’s The Fame Riot has had quite a past couple months. They’ve suddenly gone from just another PNW band that only few were lucky enough to see, to a signed group, to a US tour, and now they’ve just announced a new EP dropping Friday, February 24. It’s about time these guys got some recognition though, with a performance like theirs, it’s a shock this didn’t come sooner.

The night at Kitsap Sun Pavilion opened up with ITEM, a small and fun pop duo great to kick off the event. ITEM was super impressive, especially given the very small following the band has. Their studio EP’s have the typical catchy pop melodies, and sometimes edges towards more of a 90’s boyband vibe. Live however, they bring the same bright times, but with an added depth and intensity that makes them sound more indie/alternative. In addition to the feel-good music, the duo also has a great stage presence—they’re energetic, into it, and ready for a good time.

The night took quite a turn opening up the stage to Asterhouse, a much more raw rock group, complete with a DIY plywood pedalboard to match the aesthetic. The sound features many long, A cappella singing breaks from the lead singer/drummer with passionate lyrics to match the performance. The set was cool to see simply because it was a bit different from more conventional bands. The singer doubles as the drummer, they’ve got hilarious personalities, and it’s easy to see that their sound is simply very authentically them. An interesting and enjoyable set, and something quite different than what you would expect to be opening for The Fame Riot.

Last before our headliners was Berahmand, another pop group that often sounded reminiscent of 90’s boy bands. The band had a pretty fun set, filled with synth beats and a generally dance-ready vibe, it had exciting moments, but usually remained a little more tame. The set was pretty much what you’d expect from a smaller Portland band; you could tell the members were talented, and the music was interesting to experience live, but they seem to be a bit stuck with a musical theme that rings loud in each track played.

No matter the time or place, The Fame Riot will always deliver a fantastic set. Talking to them offstage, they’re incredibly humble and loving, eager to talk to any fan that comes up to them, and happy to sign everything they can. Onstage, they take on a whole new personality, one that works perfectly for their performance. The brothers are funny, confident, and always ready to roll around on stage and party with the crowd. Dressed in metallic leggings, sequined jackets, and colorful scarves, their outfits pretty much sum up the performance—it’s fun, it’s crazy, and it sucks you in.

The boys have a pretty typical upbeat pop sound, but their live show is truly what brings it to life. Their charismatic performance is filled with energy, happiness, and skill far beyond what you would expect from a young and somewhat underexposed local band. Each song is made to dance along to, and the carefree party attitude that fills the room is guaranteed to put a smile on your face.

For a wonderful Saturday night, The Fame Riot pulled in quite a lineup that was a great way to celebrate the long weekend. ITEM was very impressive with a sound and a performance that are both very talented and ready for a bigger stage. Asterhouse was a bit of a shock, but a great one at that, and something different than we typically get to see. Berahmand may never be pronounced correctly by the crowd, but their performance gave them a nice dose of something fun. And finally, The Fame Riot closed the night out with a set that could’ve partied on for hours, and definitely needs to come back soon.