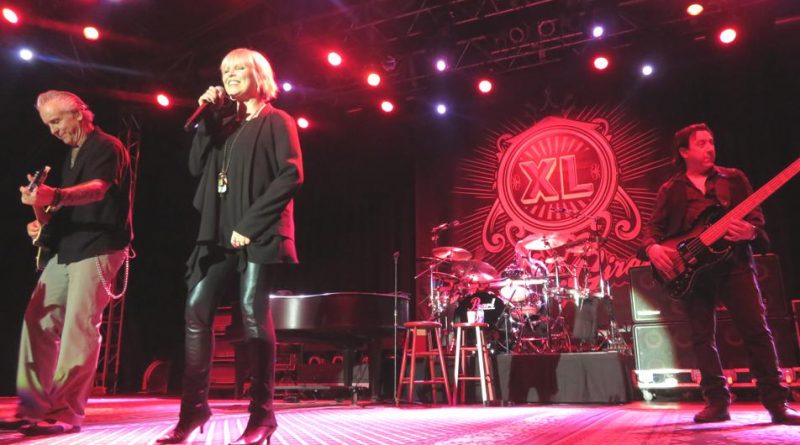 There’s no two ways about it; Pat Benatar kicks ass.

The Grammy-award winning, MTV darling of the ‘80s brought her 40th anniversary show (yes, it’s been four decades since the release of her debut album, In the Heat of the Night), to Tacoma’s Emerald Queen Casino this past Friday (July 26). There were classic hits, new twists given to old favorites, and a preview of something new.

On this outing, Benatar stripped things back to the basics. She fronted a power trio of guitar, bass, and drums — and, really, what more do you need? Nothing, if you’ve got the chops. And Benatar does.

She came roaring out of the gate at full speed with the very apt “All Fired Up.” She was attired in basic black; trousers that were a split-fabric design (faux leather in front, cloth in the back), a loose top and jacket, a dangly necklace, and killer heels, all the better to freely stalk the stage with. “We Live for Love” and “Invincible” rounded out the opening. And the empowering chorus of the latter song — “We can’t afford to be innocent/Stand up and face the enemy/It’s a do or die situation/We will be invincible” — sure felt suitable for these fraught times.

In a segment that Benatar and her husband/guitarist/musical collaboration Neil Giraldo called “The Duo Show,” the other musicians were sent offstage, Giraldo took up an acoustic guitar, and the two gave a “Behind the Music” type look at a few songs, in “Unplugged” style arrangements. Giraldo recounted how he came up with a stuttering keyboard riff that Benatar thought was a bit crazy, which was then developed into the hit “We Belong.” “Treat Me Right” benefitted greatly from being transformed into a jazz number; cool and seductive, it surpassed the original, in my view.

Benatar has always been known as a powerful singer. Would you believe that her vocals have actually improved over time? There’s a greater heft, and more resonance, to her voice now, bringing a new richness to the songs. And Benatar clearly revels in the control she has over her instrument; you could feel her joy as she threw she threw back her head to hold a note, and kept on holding it, to the audience’s delight.

We got “Hit Me With Your Best Shot” and “Love is a Battlefield.” We learned that the video for “You Better Run” was the second video played on MTV (making Giraldo the first guitarist to ever appear on MTV, Benatar was proud to note). She dedicated “Hell is for Children” to “all children at risk,” adding that it was sad that 39 years after she’d first recorded the song there was still much that needed to be done, as far as addressing child abuse.

We also got a surprise. During the encore, Benatar performed a new song, from an upcoming musical she and her husband have been working on, loosely based on their own lives; “After the Fall,” a heartfelt ballad about forgiveness in wake being let down by a loved one. And what better to end with than her breakthrough hit, “Heartbreaker,” which she didn’t even have to sing herself, as the audience knew all of the words.