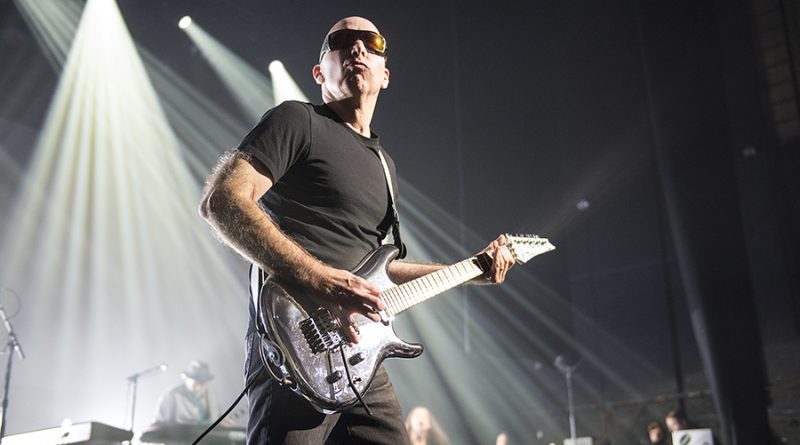 2018 kicked off with the one and only Joe Satriani bringing his G3 2018 tour into the Moore Theatre to a packed house. Satriani has been touring with an amazing lineup of fellow guitarists since 1996 and this year’s lineup featured John Petrucci of Dream Theater and Def Leppard’s Phil Collen.

Phil Collen opened up the show with an impressive mix of hard rockin’ electric blues that was downright funky. With drummer Forrest Robinson and bassist Craig Martini, Collen played with passion and force. Joined later in the set was singer Debbi Blackwell-Cook who really brought together their unique brand of blues, soul and rock ‘n’ roll. Cook fronts Collen’s other side project, the bluesy Delta Deep and she’s also the Godmother of Phil’s wife Helen.

Next up was John Petrucci from Dream Theater and other side projects like Liquid Tension Experiment. Joining Petrucci was Dream Theater’s drummer Mike Mangini and bass player Dave LaRue. These guys simply took it to another level with some amazing guitar wizardry.  Man it was really something else!

The headliner for these G3 performances is one of the premier electric guitar players on the planet. Joe Satriani plays with an energy and style that grabs you and doesn’t let go. His music is the ultimate in instrumental guitar. Joining Satriani on this tour is Bryan Beller on bass, Joe Travers on drums and Mike Kenneally on guitar and keyboards.

To close out the evening Satriani brought out Petrucci and Collen for three encores with Blackwell-Cook on vocals, singing Deep Purple’s “Highway Star”, Steve Wonder’s “Superstition” and the blues rock classic “Going Down”, written by Don Nix which was made famous by Freddie King and Jeff Beck.

It had been a long time since I’ve been to a guitar rock metal show. My tastes in this genre tend to flow towards King Crimson, Adrian Belew and Buckethead. It was great to see so many fans in the audience that loved every aspect about this show. And it was great to spend time with some of my fellow photographers in Seattle who cover the hard rock scene more than I do. What a great way to jump start 2018.

My complete photo gallery can be seen here: http://www.peterdervin.com/20180111_g3.html