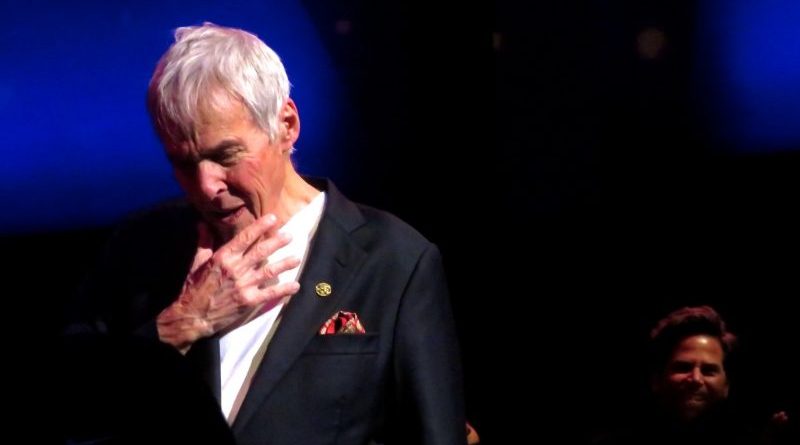 The 1960s was the decade rock ‘n’ roll grew up and turned into rock, with artists like the Beatles, the Rolling Stones, Bob Dylan, Jimi Hendrix, and Janis Joplin taking the music in exciting new directions. But there was another side to the decade too, music that was smooth, but with more bite than just “easy listening” fare, the kind of sophisticated pop produced by the Motown label, Herb Alpert & the Tijuana Brass — and Burt Bacharach.

Bacharach’s songs are so ingrained in our culture, it’s safe to say most people know at least one, even if they don’t know that Bacharach wrote it (he being responsible for the music, working with numerous top lyricists over the years). Take the first medley in his recent Seattle show, this past Friday, March 16, at Benaroya Hall, which consisted of: “Don’t Make Me Over,” “Walk On By,” “This Guy’s in Love with You,” “I Say a Little Prayer,” “Trains and Boats and Planes,” “Wishin’ & Hopin’,” and “(There’s) Always Something There to Remind Me.” And that’s just for starters; there was a lot more to come this evening, from a man who has been a part of, and helped shape, the music industry for some 70 years.

It’s something of a wonder Bacharach is still making live appearances. After all, he’s 90 years old (turning 91 this May 12). And he’s showing his age. He doesn’t walk out on stage; he shuffles. He leans against the piano when he gets up in between songs to talk to the audience. His voice is a gravelly rumble (at one point he joked that one of the show’s singers told him, “I couldn’t understand a word you just said!” following a monologue).

But when he sat at the piano to play, hunched over, his deep involvement with the music was clearly evident as he shut his eyes and swayed to the beat. Bacharach was accompanied by a small group of musicians (violin, sax, trumpet, keyboards, drums), and three singers, who took most of the lead vocals. But make no mistake: Burt, seated center stage, and in casual chic attire (dark blazer and white shirt; jeans and Nikes), remained the focus. He even took the lead vocal on a few songs himself, rasping his way through, more reciting than singing, but thrilling the audience nonetheless.

There were a lot of greatest hits; how could it be otherwise? “Anyone Who Had a Heart,” “A House is Not a Home,” “Raindrops Keep Fallin’ on My Head,” and “(They Long to Be) Close to You” were all present and accounted for. But there were also some surprises. Like “Mexican Divorce,” a witty song about getting a quickie divorce south of the border. “We wrote a long time ago, before they even thought about building a wall,” he joked (he added that his own first split had been a “Reno Divorce,” then explained exactly how that worked, for those born well after that era). An extended medley of movie songs included not only such instantly recognizable classics as “The Look of Love,” “Arthur’s Theme (the Best You Can Do),” and “What’s New Pussycat,” but also “The World is a Circle” from the 1973 musical film Lost Horizon, a notorious flop then, and a camp classic now.

Bacharach’s anecdotes added a lot of entertainment throughout the evening. As when he described working with Aretha Franklin on the song “Falling Out of Love,” and telling her “It’s in G major.” “No, it’s not,” she replied, informing him that the key needed to be changed (and you may be sure that it was). He introduced “My Little Red Book” by explaining it was “my idea of a rock ‘n’ roll song.” It flopped when first released by Manfred Mann in 1965. Then Love got a hold of it. “They changed the melody,” Burt told us. “Which I didn’t like at all. They changed the chords. Which I really didn’t like. Then they made it a hit record. Which I liked a lot.”

There were also more serious moments. The show opened with a short version of “What the World Needs Now,” a bittersweet song to hear on a day when the news was full of stories about the recent atrocities in Christchurch, New Zealand. Bacharach alluded to the tragedy afterwards, saying, “I’m glad we played this song at this point in time. In our life. In the world.” He choked up, saying “My God…,” then composed himself before concluding, “I’m glad we wrote that song.” His emotions became more searing later in the show, when he introduced “Live to See Another Day, a song he wrote with Rudy Perez, and released last year, to benefit the group Sandy Hook Promise (an organization working to prevent gun violence). “I don’t want to hear any more ‘thoughts and prayers,’” he said. “Give me a break. Goddammit, we’ve gotta change our laws!” Bacharach’s outburst was met with a round of applause.

But for the most part, it was a light-hearted evening — a master class in the fine art of crafting a well-made pop song, spiced up with choice anecdotes from the master craftsman himself. “I’ve enjoyed myself being with you here tonight,” Burt said at the end. The feeling was mutual, Burt.