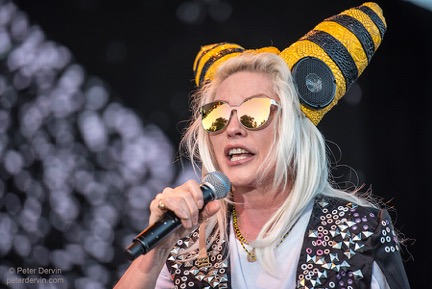 Rock and Roll Hall of Famers Blondie are currently on tour in support of their newest album Pollinator. Joining them on this tour is the band Garbage and on this West Coast swing, John Doe & Exene of the band X. I last caught Debbie Harry and Blondie a few years back when they shared a co-bill with Devo, which also happened to be at Chateau Ste Michelle in Woodinville, Washington.

On this beautiful summer evening, John Doe and Exene opened the night with an acoustic set of X classics and some tunes from the Knitters (an X side group with Dave Alvin and DJ Bonebrake) repertoire. Songs included “Because I Do,” “Long Chain On,” “In This House I Call Home,” “Skin Deep Town” and “The New World.” Both John and Exene looked and sounded great with a nice opening set. 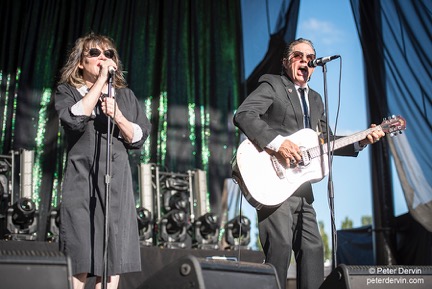 Truth be told I knew the John Doe and Exene songs more than I did the next band Garbage. As they hit the stage, front woman Shirley Manson was a striking sight, in a beautiful red overcoat and her flaming orange hair. Garbage proceeded to churn out a dynamic set of songs from their career, which began in 1994. Opening with the song “No Horses” and continuing with “Queer,” “#1 Crush,” “The World Is Not Enough” and so many more, with the crowd going wild when they performed their hit song “Stupid Girl.”

After the Garbage, set the anticipation for Blondie exploded as they came on stage. Debbie Harry, wearing an interesting looking headdress of a Honey Bee kicked off the show with “One Way Or Another” and “Hanging On The Telephone” from the classic album Parallel Lines. With original band members Chris Stein and Clem Burke with Leigh Foxx, Matthew Katz-Bohen and Tommy Kessler, the band played a variety of new songs from the latest album Pollinator and many classic hits. 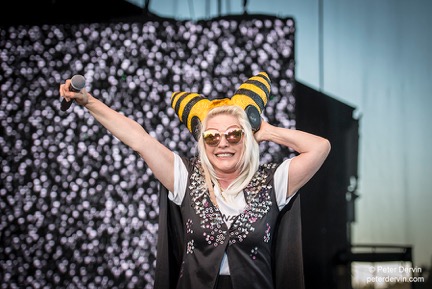 For me the highlight was their performance of “Rapture” which was considered one of the first crossover rap songs, especially from a band that was new wave. Blondie started as a pop punk band, morphed into new wave and then into disco all within four years from 1976 to 1980. 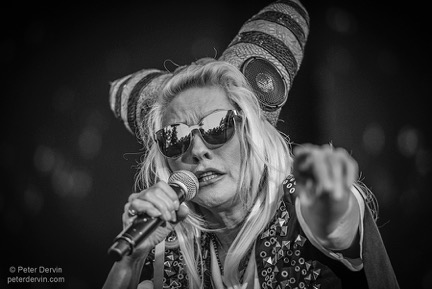 Whoever decided to match up these bands to perform together got it right. The crossover audience was there for both Garbage and Blondie with people dancing in the aisles and singing in unison with the bands. Certainly a great time was had by all.