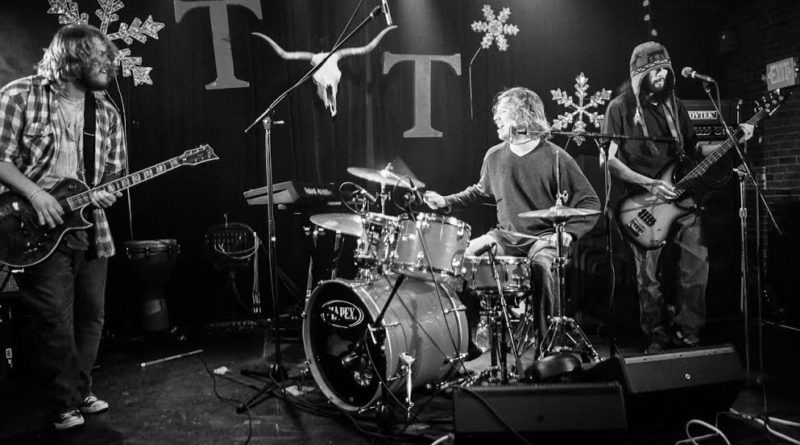 It’s pretty hard to draw a crowd during the holiday season, especially for a show being held four days before Christmas. Want to increase the difficulty? Schedule it on a rainy workday with no sponsorship. Apparently, none of this intimidated the music fans there that night nor the bands who were clearly “all in”, delivering a powerful and memorable rock show.

With four acts in the lineup, Trash Dogs took the stage earlier than normal, playing a set of trashy American rock and roll. Vintage equipment helped to deliver crunchy distortion all night, even with a handful of instrument changes. Although the opener, Trash Dogs was immediately and noticeably filled with seasoned musicians. Johnny Wade (vocals/guitar) coached the audience to move forward before their first song, challenged the audience to dance a few songs later, navigated through a broken guitar string then wrapped up their set with “Animal”, a strong, danceable number with a powerful hook. It all made sense once Trash Dogs explained that, due to a family emergency, the lineup had shifted and made them the opener. They also declared “fuck cancer”, but hopefully these two call outs weren’t related.

Next up was Dirty Dirty, a duo led by Ian Forrester (vocals/guitar) with newly added Drew Shreve (drums). After somewhat of a hiatus, Dirty Dirty has had a string of Seattle shows recently and it’s obvious that they’ve elevated their game. They performed some of their older songs but it was their unreleased material which really stood out, shaking the audience into the present. Ian Forrester has always emphasized a heavy, punkish, fuzzy distortion in his music but his new material is even more so. A master of pedals, Ian ensured a searing garage goth-punk rhythm with pinpoint, stripped down solos. His vocals were dynamic and unpredictable, singing the majority of the time while yelling through the choruses. Meanwhile, Drew provided speedy drum fills at opportune times while liberally crashing oversized cymbals to amplify each song’s energy.

Third in line was Monsterwatch, a local 5-piece that simply undersells their “groove punk” self-description. They can’t be pigeonholed into any one genre. They sounded punk, sure, but they also sounded rock, alt, psychedelic, industrial and stoner at times. They were nuanced but also knew how to punch the crowd in the mouth. One minute you were watching accelerated, high energy aggression and the next minute you were being enticed by slower, more melodic numbers. Most bands avoid the dangers of mixing too many genres, but Monsterwatch appears to have both the skill and intent, making their music interesting and unique. For example, they were often tweaking pedals midsong, creating and controlling feedback while delivering a vigorous set that increased the audience’s dancing the longer it went on. Monsterwatch is one of those “must see” local bands.

Unlike the rest of us, headliner Asterhouse had a truly amazing year. They self-released a CD with Actionesse, Crystal Desert and The Pro-Nouns, toured on said CD, produced a stellar music video for “Sweet Fragile World”, performed in nearly every Seattle venue and were reviewed by just about every publication in the PNW music scene. They are a friendly, hardworking bunch who are (deservedly) well-networked. They generously shared the stage with Maria McCausland (vocals) on “The Only Ghost” and Henry Lavalee of the Naked Giants (bongos) on “None Of Your Business”, “Dalai Lama” and “Singing On A Soapbox”. John Thornburg (vocals/drums), brother Russ Thornburg (guitar) and friend Julio Posada (bass) provided an enthusiastic set of pop rock tunes that kept the audience nodding and smiling. John’s trademark standing between drum fills while reaching out to the audience was only emphasized by Russ’ airborne antics and neck-snapping flips of hair. Stage presence aside, they are all markedly proficient on their instruments. John has speed to spare on drums, Russ anchors the band in rhythmic chords and creative solos while Julio slaps the bass with smooth confidence. It was a great way to wrap up a midweek’s holiday season show with friends and fans alike.

Photos courtesy of Thee Lord Fotog. Check out more photos from this show and others HERE.