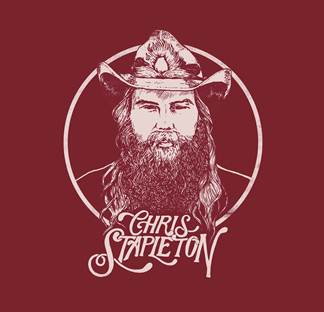 “Chris Stapleton’s All-American Road Show” will hit the road again in 2018 including newly confirmed shows at New York’s Madison Square Garden, Los Angeles’ The Forum, and Chicago’s Hollywood Casino Amphitheatre, among many others. Produced by Live Nation, the tour will feature Marty Stuart and Brent Cobb as special guests.

Citi® is the official credit card of the “All-American Road Show” tour. As such, Citi card members will have access to purchase presale tickets through Citi’s Private Pass Program® beginning Tuesday, February 6 at 10:00am local time. For complete presale details, visit www.citiprivatepass.com.

Moreover, Stapleton is featured on Justin Timberlake’s new song, “Say Something.” The music video—which was filmed in a single shot at L.A.’s historic Bradbury Building—has been viewed over 7 million times since it was released last Thursday. Watch here.

Released December 1, 2017 on Mercury Records Nashville (purchase here), Volume 2 debuted at #1 on the Billboard Country Albums chart and #2 on the Billboard 200 chart. Its release follows the May 5, 2017 release of From A Room: Volume 1, which was the #1 best-selling country album of 2017. Stapleton’s 2015 double-platinum solo debut, Traveller, was the #2 best-selling country album of 2017.

Both Volume 1 and Volume 2 take their name from Nashville’s historic RCA Studio A (the capital “A” in “From A Room”), where they were recorded with Grammy Award-winning producer Dave Cobb. Along with Stapleton on vocals and guitar and Cobb on acoustic guitar, the album features Morgane Stapleton on harmony vocals as well as longtime band-members J.T. Cure on bass and Derek Mixon on drums.

Tickets go on sale Friday, February 9 at 10:00 a.m. at LiveNation.com or charge by phone 1-800-745-3000. All tickets subject to applicable service charges and fees. Dates and times subject to change without notice.