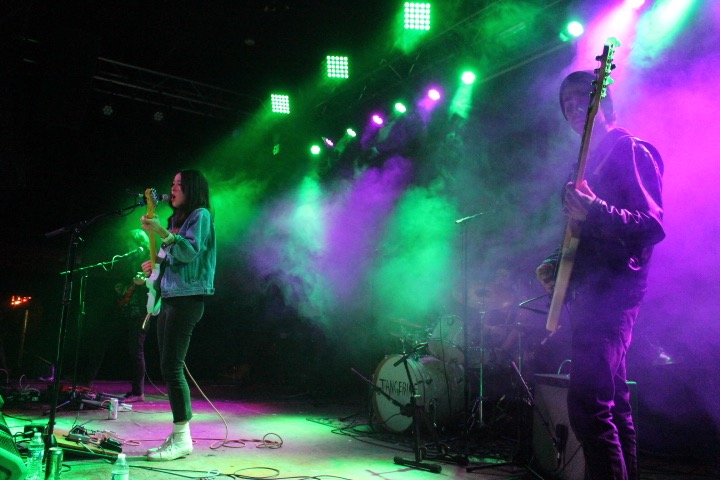 Maybe you’ve heard them around town, on KEXP or 107.7 The End. Maybe your friend put them on your party mix, or on your road trip playlist for a trek to Portland or Vancouver. If none of the above are true and you haven’t heard Tangerine, do yourself a favor and give them a spin. It was quite the honor to see them on the night of their cassette release show at Neumos. It was even more of an honor to join Marika, Toby and Miro pre-show for some beers, burgers and asparagus (they’re a relatively healthy band). I was way late, but they were way cool about it (sorry again!) and they were very happy to discuss their EP, being added to the Sasquatch lineup and cassette culture.

NWMS: First of all, because I’m pretty lame, where’s a good place to buy a cassette player these days?

Toby:  We recently went to a music festival and they have like seven of them and they all worked apparently and they were only five bucks.  So they’re really cheap.

NWMS:  Yeah, that really seems to be a big thing out here.  I’m from the east coast and only when I moved here last year did I really start to see bands putting out cassettes.  It’s awesome!

Marika:  They sound really nice and it’s a cheaper way than vinyl to put out our music. But we’re not anti-CD, so we’ll definitely release it on CD as well.

Toby:  It’s a nice way to shake it up a little bit. It’s really fun to design the tape fronts and you get to choose the color of your tape.

NWMS:  What color did you guys go with?

NWMS:  Well I guess mustard goes with sugar teeth, you know like cavities and stuff.

Marika:  We’ll have to do a reissue. (laughs)

NWMS:  I was also thinking this is a really great way to preview your EP before the official release.  I mean you can’t rip it this way—

Marika:  Well, you could.  You could do it the old fashioned way and record one tape to another.

Miro:  Yeah if you do it that way you definitely deserve our music for free. (laughs)

NWMS:  Oh yeah!  Congrats on being added to Sasquatch by the way!  That’s awesome.

Toby:  We’re really stoked on that.  None of us had ever been there before so it’s really awesome.  I did see Jack White at The Gorge and it’s really easy to underestimate how nice that backdrop really elevates a show.

Marika:  What is that, the Columbia River?

Toby:  Yeah, the Columbia River. It really adds to the show.

NWMS:  So in 2014 you guys put out two EPs (Behemoth! and Nothing Better), but nothing in 2015.  Was it a slow writing year or were you guys busy really busy?

Miro:  And then we released another EP in 2015, right?  That was the beginning of October?

Toby:  No, we didn’t put anything out. It was just a combination of things. We were writing the whole time. At this point all the songs are stacked up. Before we were releasing everything as we were writing it but this time, as we were recording this EP, we probably had four times as many songs as we usually do. It’s just a matter of finding the right time to put everything out.

Toby:  No good reason. But we’re still keeping up with the music.

NWMS:  Any previews for the fans of what to expect on Sugar Teeth?

Miro:  We went in a couple different directions. Some of our songs I feel hit a little harder in terms of fuzz and distortion. Like our single “Tender” definitely sounds like that.

Our last song, which is the title track has a real 80’s vibe. Like we recorded 80’s style snares which is something we’ve never really done before.

Marika:  For me I feel this EP is the first one we’ve done where the melodies of the vocals are where I want them to be. I feel the vocals are a little more cohesive across the board even though the songs are all different. In the past I feel I was learning a little more but now going to the studio I was able to really ask what I wanted. For me it’s just a little truer of an expression of how I want to sound.

Toby:  Yeah, that’s really cool. I feel it’s more extreme. You kind of said that. I feel we go a little grittier at times and then a little smooth at times. It’s also really interesting because we recorded with three different people.  It’s the only EP where we recorded with more than one person. So that’s something that’s different too, that the production varies a little across the album.

NWMS:  Was that something that you guys were conscious about going into the recording? It wasn’t really something that came out in the studio that some songs would be more aggressive?

Miro:  It was kind of conscious.

Marika:  I think we also really wanted to explore. Because EPs are short, you can kind of mess around a little more. We haven’t made an album yet so we just want to try out different things.

Marika:  Miro came up with it.

Miro:  It came from the Led Zeppelin song “Tangerine,” which is one of my favorite Led Zeppelin songs. We just felt it didn’t really pertain to any particular genre. None of us are really that big Led Zeppelin fans or anything, but we all thought it sounded good.

Toby:  We debated it for awhile. I’ve had a lot of regrets before with band names but I’m happy to say I’m happy with Tangerine.

NWMS:  And you guys have been a band for a while, what were you guys previously called?

Mariko:  In middle school. Then we were The Neons.

Miro:  Yeah, we played Neumos as The Neons. And then he joined us after we played there.

Mariko:  No. We wanted you to come over and hang out.

Toby:  Yeah, ten years. We did take a long break though, like five years. We just wanted to go explore different areas of life. Like college… which failed for me. It worked for her though! She graduated.

NWMS:  Will you guys be doing an album release show?

Toby:  Thank god! We’ve always done that in the past, now we just want to play great shows and release music along the way. Our EP’s pretty short, it’s only four songs so really just tonight is like the big release.

Look for Tangerine’s EP Sugar Teeth out February 19th on Swoon Records. Check them out TONIGHT in Portland at Bunk Bar. You can stream their new single ‘Tender’ off of their SoundCloud (check out the embedded link below), and look out for their next single to be released in the upcoming weeks.