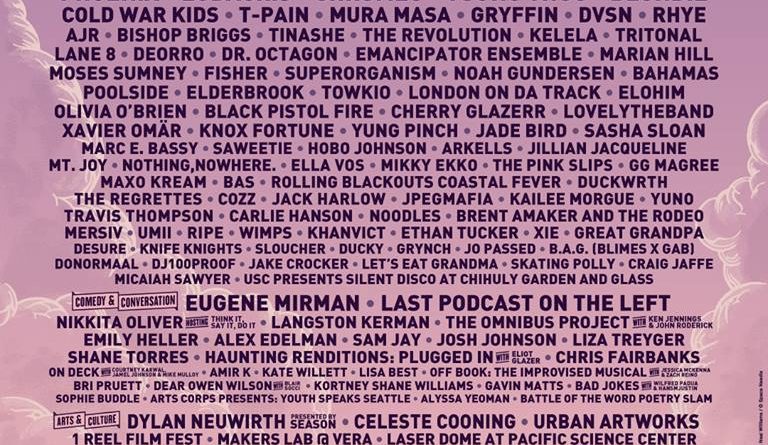 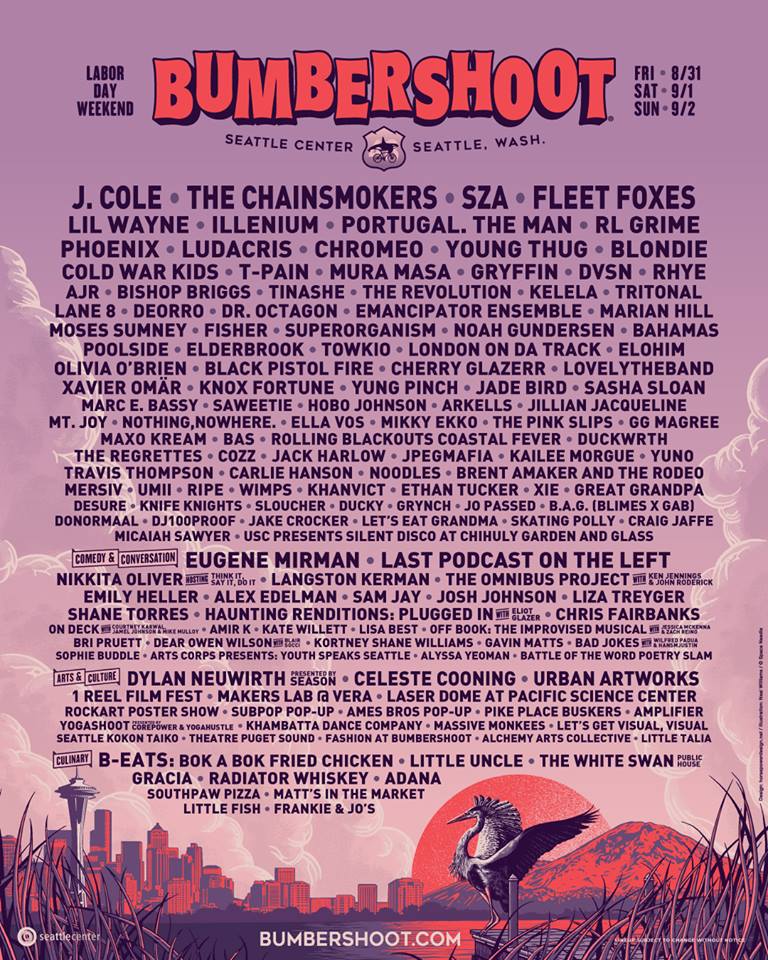 One of Seattle’s most renowned restaurateurs, Dan Bugge (Matt’s In The Market, Radiator Whiskey, The White Swan, and 100 Pound Clam) returns to Bumbershoot with an even bigger hand-picked selection of Seattle’s best food. Don’t miss out on some of the city’s finest culinary offerings like Matt’s in the Market, 100 Pound Clam, Radiator Whisky, Gracia, The White Swan, Bok A Bok Fried Chicken, Little Uncle, Little Fish, Southpaw Pizza, Adana, Frankie & Jo’s, and more.
Event Pass Information
Passes for Bumbershoot go on sale Friday, May 4th at 12 noon PST.
*3-Day Passes, starting at $220
*VIP Passes, starting at $475

About Bumbershoot
Now approaching half a century old, Bumbershoot is one of Seattle’s largest cultural touchstones. Each year, thousands of people from across the country flock to this acclaimed festival, which has become one of the biggest and beloved festivals in North America, while maintaining its Northwest spirit and innovative roots. The name Bumbershoot was chosen both as a knowing nod of respect to our city’s most famous weather pattern and as a symbol of the overarching mission of this festival: to be an umbrella for all of the arts.  Since 1972, Bumbershoot has been a multi-disciplinary arts festival showcasing the best of music, comedy, dance, film, literary arts, performing arts, theatre, visual arts and more. Spanning the Seattle Center grounds, a campus originally created for the 1962 World’s Fair, Bumbershoot has continued its legacy of celebrating innovation and the search for what’s next.
The programming at Bumbershoot strives to be a contemporary microcosm of what is current across those disciplines and genres and to give its audience opportunities few other festivals in the world offer.
About One Reel
Founded in 1972, One Reel is a non-profit multi-disciplinary arts organization striving to inspire audiences to become year round arts patrons; challenging artists to create & explore; and training the next generation of arts & events industry professionals. Current One Reel projects include City of Music Career Day, Mayors Arts Awards and Pianos in the Park. For more information, visit onereel.org.
About AEG Presents Pacific NW
AEG Presents Pacific Northwest owns and operates the Showbox and Showbox Sodo venues in Seattle and produces the Marymoor Park Concert Series at Marymoor Park in Redmond, WA each summer. Recent AEG productions in the Northwest include Paul McCartney, Pearl Jam, Adele, Macklemore and Ryan Lewis, and the Foo Fighters. The office produces a diverse array of one-off club to arena level concerts and events annually in Washington, Oregon, Idaho, Montana and British Columbia and supports the AEG Presents touring divisions. Visit Showbox Presents for more information.