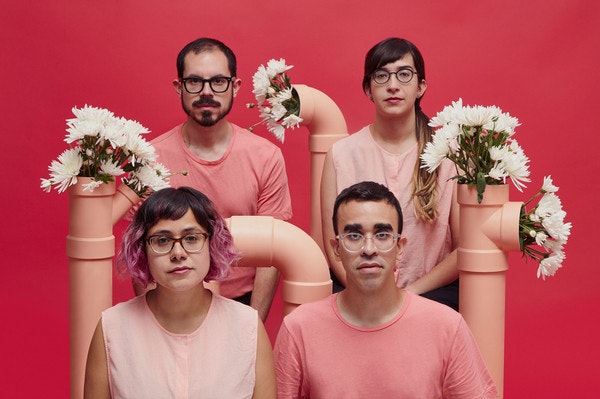 Brooklyn-based electronic indie band Balún self-identify as transnational. The quartet that broke out of the San Juan indie scene a decade ago has since undergone a formational odyssey through the industry, academia, and the stateside Puerto Rican experience. Since their early days as part of the DIY music scene in San Juan, Balún has built a reputation for genre-fluidity. As film school and conservatory students playing every available bill and selling home-burned CDRs to electronic, hardcore, and punk crowds, Balún amassed an eclectic following on the island. Relocating to Brooklyn, the band’s pursuits outside of Balún began reshaping the context of their music. Balún has blossomed from college students making music on freeware and toy instruments into world-class musicians merging their far-flung disciplines under one banner. With these elements beginning to coalesce, the band perpetually expanded its vision over the ensuing years. Releasing a series of singles, EPs and official remixes, Balún explored shoegaze, folk, and bedroom electronic pop, tying these forays together with the introspective magical-realism of Angélica Negrón’s lyrics. More recently he band’s deep understanding of reggaeton’s Jamaican dancehall roots has transformed their shoegaze pop into “dreambow.”

Balún will appear at Funhouse on September 5th.