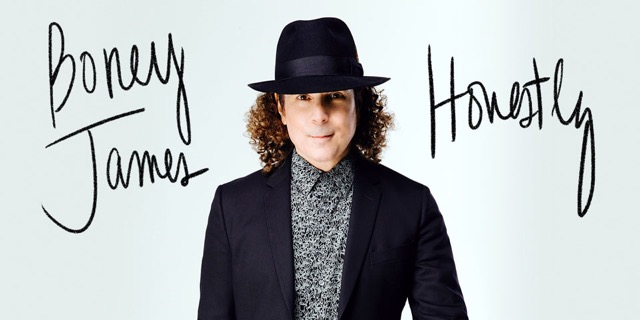 Honestly follows futuresoul, James’ 2015 release which spent eleven weeks at #1 on the Billboard Contemporary Jazz Chart. The New York Times raved, “Boney James performs with panache…His arc as a soloist is emotional…he can paint a scene.”

Honestly, says James, is quite different sounding than the previous record. “It’s more exposed,” he says of the 10-track collection. “Some of the arrangements are not as dense. A number of the songs have a more buoyant, cheerful, happy quality to them.” James produced the record and co-wrote all but one track, his interpretation of the Johnny Mercer-Hoagy Carmichael classic ‘Skylark.’

Born in Lowell, Mass. and raised in New Rochelle, NY, Boney became seriously interested in music in the mid ‘70s, a very vibrant and freewheeling period for popular music. “You could hear different genres all over the radio. Contemporary jazz was everywhere – people like Grover Washington Jr., Herbie Hancock and George Benson were stars,” he marvels. “Artists like Stevie Wonder and Earth, Wind & Fire were incorporating jazz into what they were doing, and the jazz guys were mixing R&B into their sound. It was a great time to be a young musician.”

By 13, James – born James Oppenheim and nicknamed “Boney” in his mid-20’s when a meager touring per diem saw him growing thinner – was jamming in basements and garages. One summer during college, he found himself sitting in with some friends at a club. “Playing in a real club, with the energy of a real audience was such a fantastic rush,” he remembers. “That was the spark for my decision to become a professional musician.”

James says, “When people ask me what category my music falls under, I always say, ‘It’s Boney James music’.”