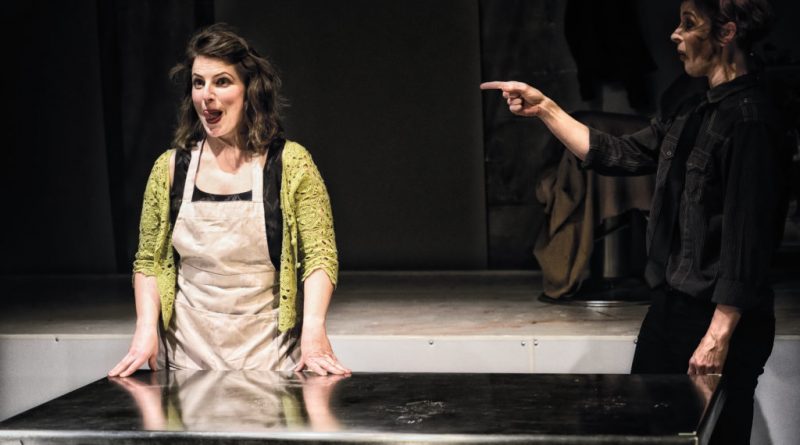 You have to give any small theater company that dares to stage a production of Stephen Sondheim’s Sweeney Todd: The Demon Barber of Fleet Street credit just for nerve. For not only is it a classic musical (meaning people will already have a preconceived idea of what the show should be like), it’s also got a very challenging score, for both the leading characters and chorus alike (with little dialogue, Sweeney Todd is really more of an opera than a musical). Happily, the Reboot Theatre Company is up to the challenge.

The original Sweeney Todd came to life in a “penny dreadful” periodical published in London in 1846. Todd was a murderous barber who killed his victims in order to rob them; his accomplice, Mrs. Lovett, got rid of the bodies by baking them in meat pies. But Sondheim based his musical (which opened in 1979) on Christopher Bond’s 1973 play, which gave Todd a sympathetic backstory. In Bond’s play, Todd is a victim of the class system, falsely accused of a crime and sent off to Botany Bay so that a wicked judge can have his way with Todd’s wife. Now Todd’s back in town, sharpening his razors in anticipation of exacting revenge.

Reboot Theatre has minimal resources, but uses them to great advantage. The actual theater space (the Slate Theatre in south Seattle) is small; if you sit in the front row, you’re sure to have an actor rolling at your feet at some point (or at your side or even behind you). But it gives the production a heightened intimacy — there’s no way you can escape the panorama of horrors unfolding just a few feet in front of you. Instead of a full orchestra, there’s a mere four musicians. But that actually pushes the voices into the foreground, making it much easier to understand the lyrics — and Sondheim’s the kind of lyricist where you don’t want to miss a single word.

Setting the show in present day London, with everyone brandishing cell phones, instead of the 19th century, saves the bother of having to worry about a fancy set design (the cell phones actually felt kind of gimmicky to me, but overall they weren’t too distracting). This is a Sweeney Todd that strips everything back to the essentials, keeping the focus where it belongs — on the actors.

The nontraditional casting that’s a core element of Reboot Theatre’s mission completes this reinterpretation of Sondheim’s work. Todd is played with the malevolent cool of a jaded, bitter rock star by Mandy Rose Nichols (initially dressed in basic black), with Alyssa Keene as the sometimes daffy, but ever-practical Mrs. Lovett. The two spark off each other nicely, especially in the show’s most notable sequence, the end of act one, where Todd’s titanic rant against the world and all that it stands for (“Epiphany”) is juxtaposed with the delightful “A Little Priest,” wherein Mrs. Lovett gets her culinary brainwave about how to dispose of the bodies, and the two speculate about what folks of different professions might taste like (the song also distills Todd’s worldview into two lines that are quite apt today: “This history of the world, my sweet/Is who gets eaten and who gets to eat”). Nichols and Keene are careful not to give in to temptation and play the song too broadly; by not going over the top, the song’s comedy ends up having more bite.

Brittany Allyson brings a welcome depth to the wholesome sailor Anthony (there’s a tendency for this character to come off as too one-dimensional). And there’s a fun visual joke in having the nasty Judge Turpin tower over his runty assistant, Beadle Bamford (Kylee Gano, improbably wearing a backwards baseball cap and board shorts). Really, the entire cast does a first rate job throughout, throwing themselves wholeheartedly into the songs, clearly relishing the tricky word play. The lead characters don’t push their voices to the breaking point; they drop down an octave here and there, as needed. But their overall enthusiasm wins the day.

It’s a shame that such a terrific production has such a short run. But there are only six remaining performances scheduled. So don’t hesitate. This is a Sweeney Todd that gets the blend of horror and comedy blend just right — guaranteeing that you’ll have a bloody good time.

Sweeney Todd: The Demon Barber of Fleet Street runs through May 31, 2019 at Slate Theatre. Ticket and more show info HERE.