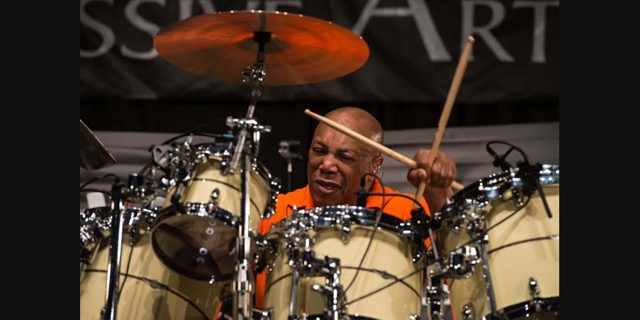 Billy Cobham came to prominence in the late 1960s and early 1970s with trumpeter Miles Davis and then with the Mahavishnu Orchestra. According to Allmusic’s reviewer, Cobham is “generally acclaimed as fusion’s greatest drummer.” He was inducted into the Modern Drummer Hall of Fame in 1987 and the Classic Drummer Hall of Fame in 2013.

Cobham’s influence stretched far beyond jazz: prog contemporaries Bill Bruford of King Crimson listened closely to what he was up to, younger drummers like Danny Carey of Tool learned from him, and even Prince played a version of Cobham’s “stratus” in concert. There’s maybe no bigger fan than Phil Collins, who has named Mahavishnu’s inner mounting flame as a key influence on his early style. “Billy Cobham played some of the finest drumming I’ve ever heard on that record,” he said.

2019 marks Billy Cobham ́s 75th birthday. “It’s been an adventure, these seventy four years that I have been blessed to experience so much in my life” Billy says. To celebrate his long continuous career as well as his birthday, he put together different projects and regions he will focus on in 2019. The US tour will feature the Crosswinds Project with Mr. Randy Brecker on trumpet!

Jazz trumpeter and composer Randy Brecker has helped shape the sound of jazz, R&B and rock for more than four decades. His trumpet and flugelhorn performances have graced hundreds of albums by a wide range of artists from James Taylor, Bruce Springsteen and Parliament/Funkadelic to Frank Sinatra, Steely Dan, Jaco Pastorius and Frank Zappa.

In 1967, Randy ventured into jazz-rock with the band Blood, Sweat and Tears, but left to join the Horace Silver Quintet. He recorded his first solo album, ‘Score’, in 1968, featuring a young, then unknown 19 year-old tenor saxophonist named Michael Brecker. After Horace Silver, Randy joined Art Blakey’s Jazz Messengers. In the early 1970s, Randy performed live with many prominent artists including Larry Coryell’s Eleventh House, Stevie Wonder and Billy Cobham. He also recorded several classic albums with his brother under the leadership of the great pianist/composer Hal Galper.

By 1975, Randy and Michael were ready to front their own group, the Brecker Brothers Band. A band of immeasurable impact and influence, they released six albums on Arista and garnered seven Grammy nominations. Their eponymous first record, which Randy wrote, arranged and produced, featured his now classic composition “Some Skunk Funk.”

Tickets for the Jazz Alley dates on sale HERE.