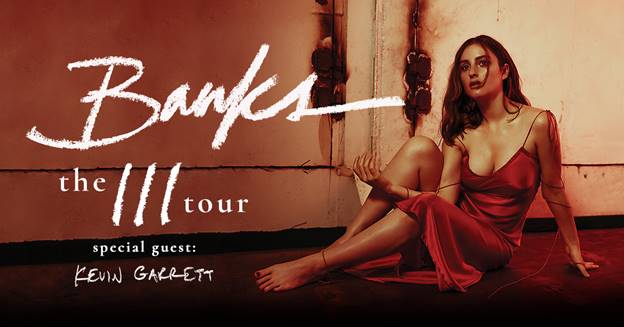 Northwest Banks fans have something to look forward to in September since she announced plans for a fall North American headline outing – her first since The Altar tour in 2017, which includes a stop in Seattle at Showbox SoDo on September 25. The III Tour, which will kick off in Toronto on September 3 at REBEL, will include a September 8 show at Brooklyn Steel in New York and an October 1 concert at the Hollywood Palladium in Los Angeles.

Banks said, “I’m so excited to get back out there and experience this next chapter with all of you. I can’t wait to see these songs that I have been working so hard on come to life.”

The fan ticket presale begins on Tuesday, June 11, at 10:00 AM local time. Tickets go on sale to the general public on Friday, June 14, at 10:00 AM local time at LiveNation.com. Banks will offer VIP packages for each show with options that include GA tickets with priority access, Meet & Greet, limited edition merchandise, and more. Fans can visit www.VIPNation.com for more information.

Citi is the official presale credit card of Banks tour. As such, Citi cardmembers will have access to purchase U.S. presale tickets beginning Tuesday, June 11, at 10:00 AM local time until Thursday, June 13, at 10:00 PM local time through Citi EntertainmentSM. For complete presale details, visit www.citientertainment.com.

Banks will also perform at such festivals as Music Midtown in Atlanta, Life is Beautiful in Las Vegas, and Austin City Limits. In a live review, VARIETY praised her “Hellishly Divine Act” and noted, “[BANKS’] command of her audience was undeniable.”

Her new single, “Gimme” (Harvest Records), which is from her forthcoming album, III,has racked up over seven million cumulative streams since its debut as Zane Lowe’s World Record on Apple Music’s Beats 1. Naming it one of the songs “You Need to Listen to,” TIME Magazine observed, “‘Gimme’ is darker and heavier than her earlier work, leaning on minimalist, hollow percussion as layers beneath stuttering synths. If this is a sign of the BANKS to come, we’re promised a worthy follow-up.”

Banks has amassed 1.2 billion global streams to date across all of her songs, including over 600 million cumulative streams in the U.S. alone. After the release of her breakout debut album, Goddess, she became the world’s most blogged about artist. The 2014 album included the RIAA-certified Platinum hit “Beggin For Thread” and the Gold single “Waiting Game.” The Altar, released in 2016, debuted in the Top 10 in over 30 countries on iTunes. Banks has performed on such television shows as Jimmy Kimmel Live!,Late Night with Seth Meyers, and Late Show with David Letterman. Her songs have been heard in films (Divergent, The Longest Ride) and licensed by such television shows as Grey’s Anatomy and Power.