Ladies and gentlemen, and all local music enthusiasts, welcome back to the fourth annual outing of our year-end daily local music spotlight, 100 Bands in 100 Days, where every day until December 31st, we’ll be showcasing a new band or artist on the cutting edge of the Northwest, presented by Verity Credit Union. Make sure to check the #100Bands100Days hashtag at Twitter daily to stay on top of all the bands featured, and make sure to follow Verity on Twitter and NW_Music_Scene as well. Some days the featured act could be an established and locally-adored Northwest-based musician and other times they could be a band with a small following that just hasn’t had their deserved time in the sun yet. Either way, we’re fairly confident you can come away from this daily segment with plenty of new favorites. Today our year-end journey takes us to a band that perfectly depicts the ups and downs of modern life, Portland’s Volcker. 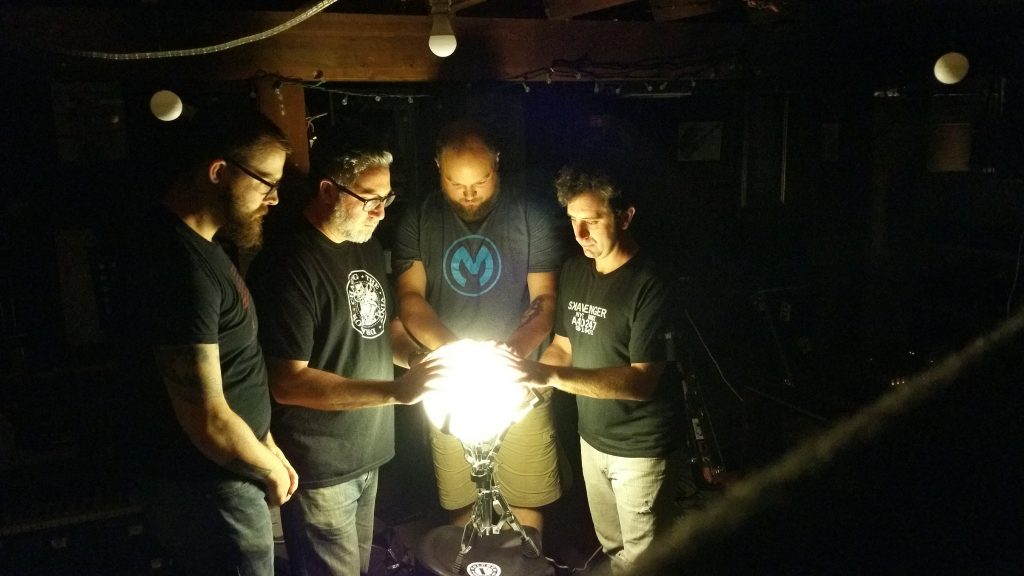 Volcker’s specific brand of sharp, no-holds-barred rock and roll comes bearing a thrashing and a message. The band was formed back in early 2015 after two of its four members previously coalesced in the Midwest years ago, their subsequent decades-long journey eventually landing them in Portland, where their main-brain, Jamie Dunphy, was previously a member of the since-disbanded local band Leaving the Scene. Musically, Volcker has a razor-sharp hard rock edge, often favoring buzzing, overblown alternative rock guitars, laser-precise drumming, and all-out smash choruses that were born ready for stadiums.

Volcker’s unbridled energy is largely fueled by its socially conscious lyrical themes, which deal in everything from political injustices, organized religion, and the corporatization of news and media. The quartet’s 2016 self-titled debut EP gave locals a good taste of what they’re capable of, consisting of four to-the-point, headbang-worthy tracks that are both thought-provoking and primal. Whether it’s the rock radio-friendly feel of “Make Me Wanna Be a Worse Man,” the vivid storytelling on “Reactionary Splendor,” or the punk aggression of the emphatic “7 & A Switchblade,” every song on Volcker shows a different angle to the band’s artistry and sound.

Those of you in the mood for a modern rock outfit with a sharp socially aware edge, look into Volcker.

(You can listen to Volcker below via Bandcamp; make sure to keep up with ­­­­­the band via Facebook and YouTube.)