Ladies and gentlemen, and all local music enthusiasts, welcome back to the fourth annual outing of our year-end daily local music spotlight, 100 Bands in 100 Days, where every day until December 31st, we’ll be showcasing a new band or artist on the cutting edge of the Northwest, presented by Verity Credit Union. Make sure to check the #100Bands100Days hashtag at Twitter daily to stay on top of all the bands featured, and make sure to follow Verity on Twitter and NW_Music_Scene as well. Some days the featured act could be an established and locally-adored Northwest-based musician and other times they could be a band with a small following that just hasn’t had their deserved time in the sun yet. Either way, we’re fairly confident you can come away from this daily segment with plenty of new favorites. Today we’re taking things in a more macabre, shocking direction, so proceed with caution as we take a look at Murder Weapons. 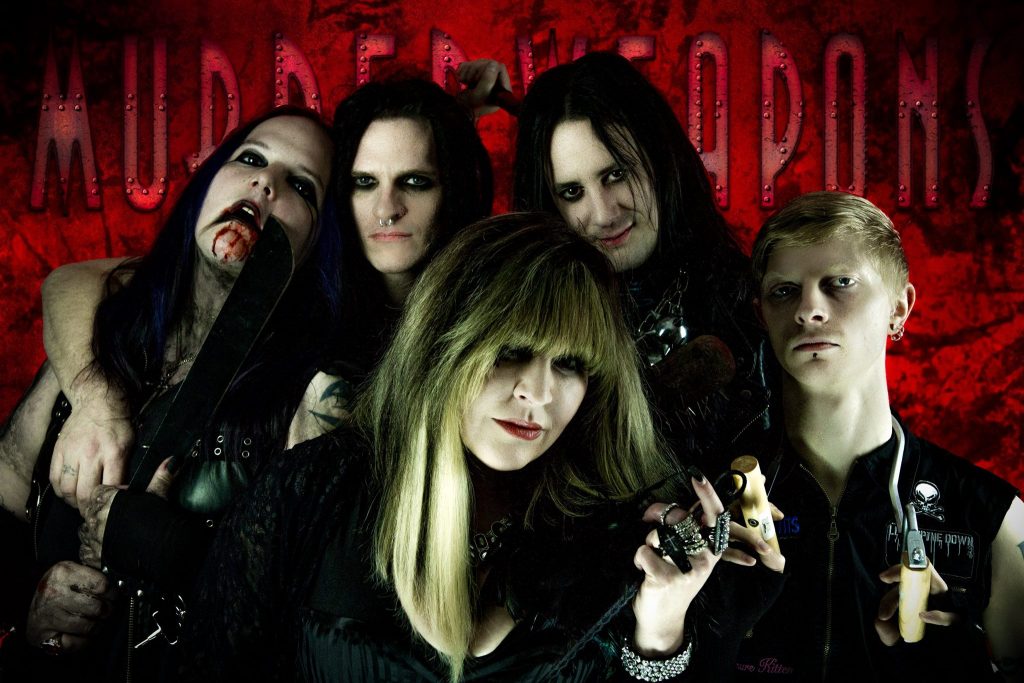 Emerging from the dark, unfriendly underbelly of Seattle’s underground music scene, Murder Weapons are a band whose style is difficult to pin down — prominent traces of shock rock, industrial rock, IBM, and post-punk dance all around their upbeat, often punishingly loud tracks. Swaying four-to-the-floor drum patterns drive the copious amounts of overmodulated synthesizers and arena rock guitars, with lead singer Dawn Woodkill’s glamorous, upfront singing bringing that needed amount of spunk to perfect their formula. Their shocking, visually-busy live performances were born out of a hatred of boring live bands that plant their feet and play their instruments and let that be that; Murder Weapons’ live performances spit blood all over that concept and the audience simultaneously.

Murder Weapons have had audience-pleasing performances in opening slots for some notable national acts, including Combichrist, Davey Suicide, The Birthday Massacre, and many more, and it’s not hard to see why. The band’s latest release, 2015’s GUILTY EP, features some of the band’s most explosive, stadium-friendly songs to date. Songs like its closer “Jigsaw” feature bouncy trance-esque synth arpeggios bouncing up and down before huge, distorted electric guitars punctuate the mix, eventually giving way to a dance floor-ready hard rocker that masterfully elements modern electronic programming techniques without sacrificing their intense rock edge.

Industrial die-hards of the Northwest, Murder Weapons are among the best doing it in Seattle.

(You can listen to Murder Weapons below through Bandcamp; make sure to keep up with ­­­­­the band via Facebook, ReverbNation and YouTube.)