Ladies and gentlemen, and all local music enthusiasts, welcome back to the fourth annual outing of our year-end daily local music spotlight, 100 Bands in 100 Days, where every day until December 31st, we’ll be showcasing a new band or artist on the cutting edge of the Northwest, presented by Verity Credit Union. Make sure to check the #100Bands100Days hashtag at Twitter daily to stay on top of all the bands featured, and make sure to follow Verity on Twitter and NW_Music_Scene as well. Some days the featured act could be an established and locally-adored Northwest-based musician and other times they could be a band with a small following that just hasn’t had their deserved time in the sun yet. Either way, we’re fairly confident you can come away from this daily segment with plenty of new favorites. Today we’re bringing our journey to the ever-fascinating Portland music scene, looking at a genre-defying outfit by the name of Unusual Subjects. 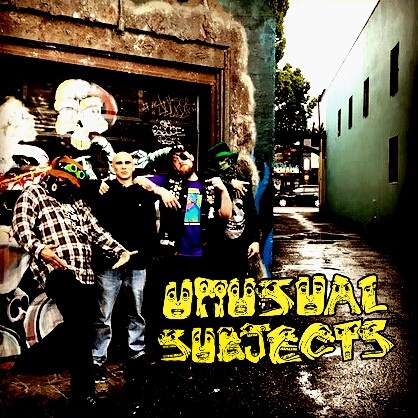 Unusual Subjects are a group of four Portland experimentalists brought together by a shared indifference towards the status quo, and a desire to push past norms and create something altogether new. Though the musical backgrounds of its four members may differ greatly, together they reach a consensus that combines punk and funk music with hip hop in a way all their own. Though the band has had a total of 10 members throughout their lifetime, their style has managed to stay consistently fresh and exhilarating. Flamboyant punk guitar riffs and sturdy live drums propel the band’s tracks forward, while vocalist Evil Butter lays down a series of fierce, upfront vocals that are sung, rapped and shouted in rapid succession.

2016’s Tales of the Unusual was the first EP to drop from Unusual Subjects, an eight-song collection that ran the gamut of musical styles, whether it was the primal, ugly punk goodness of “London Nights” or “Knuckles,” Primus-esque funk-metal weirdness with “Pockets,” or the unending marching groove of “March of the Crabmen.” The EP was just a taste of what the band would do next, with their full-length debut album Not Suspect released as a free download in May of 2017. It’s far from a pretty release, with a lot of its tracks doubling down on the previous EP’s more adrenaline-charged moments, but it’s a fitting shift in volume for the impassioned lyrical themes and vocal delivery.

Unusual Unusual Subjects recently returned to the studio to work on their second EP and third overall release. Don’t be surprised to hear Unusual Subjects’ name around in 2018.

(Listen to Imaginary Fanclubs below; you can keep up with the Unusual Subjects through their Facebook and official website.)