Ladies and gentlemen, and all local music enthusiasts, welcome back to the fourth annual outing of our year-end daily local music spotlight, 100 Bands in 100 Days, where every day until December 31st, we’ll be showcasing a new band or artist on the cutting edge of the Northwest, presented by Verity Credit Union. Make sure to check the #100Bands100Days hashtag at Twitter daily to stay on top of all the bands featured, and make sure to follow Verity on Twitter and NW_Music_Scene as well. Some days the featured act could be an established and locally-adored Northwest-based musician and other times they could be a band with a small following that just hasn’t had their deserved time in the sun yet. Either way, we’re fairly confident you can come away from this daily segment with plenty of new favorites. Today’s adventure leads us down an ominous, hazy path of forlorn guitar chords and whirring atmosphere, with a genre-defying project by the name of Dummy Dharma. 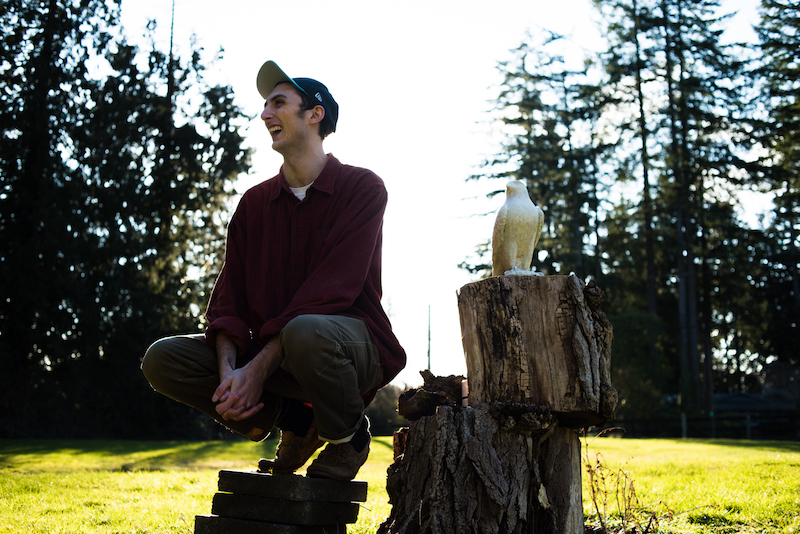 Listening to spare tracks on their own, Dummy Dharma could be misconstrued at first as another jangly, breezy mid-fi bedroom pop band with a shy psychedelic twist, but sitting down and taking in the project’s full-length debut album, A Lot of Me Melted There, from beginning to end, the album’s gauzy aura and bashful vocal delivery from sole member Chris Trimis start to settle in, and soon you’ll find yourself wanting more and more. Trimis’ melting pot approach to pop and indie music is reminiscent of a handful of artists on first listen — the distant, despondent vocals and dreary guitar on some tracks are highly reminiscent of artists like Elliott Smith and Low, others are thick, ethereal ambient folk pieces a la Grouper — but it’s Dummy Dharma’s songwriting and ear for sound that help set the project apart.

Whether it’s the spacey, slow-paced “Vitriol,” the swelling intensity of “The Moon,” or the project’s grandiose ambient opener “The Sun,” each song on A Lot of Me Melted There tells its own story, weaving its gently-delivered narratives into the beautiful, densely-layered instrumentation, which fully opens itself up and pulls you in when you’re listening to the album on headphones. The lyricism throughout the record manages to be both confessional and somewhat surreal in tone, adding to the overall mystical vibe of Dummy Dharma’s music. Soft, but tall walls of psychedelia build as each track progresses, and each song is adorned with unconventional percussion and a wealth of bonus instrumentation.