Music fans of the Pacific Northwest, get ready for our fourth annual year-end daily local music showcase, 100 Bands in 100 Days, where every day until December 31st, we’re showcasing a new band or artist you have to know about, presented by Verity Credit Union. Make sure you are checking the #100Bands100Days hashtag at Twitter on the daily to stay on top of all the bands featured and make sure to follow Verity on Twitter and NW_Music_Scene as well. Some days the featured act could be an established and locally-adored northwest-based musician and other times they could be a band with a small following that just hasn’t had their deserved time in the sun yet. Either way, we’re fairly confident you can come away from this daily segment with plenty of new favorites. Today’s featured artist is Paula Boggs Band. 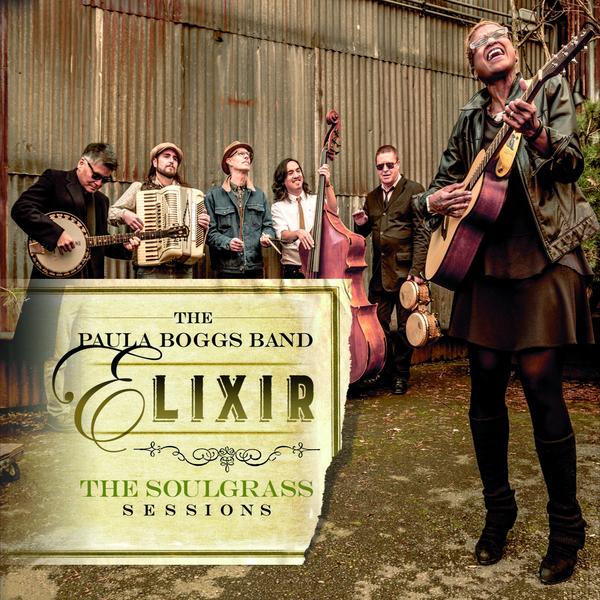 A few months ago we reviewed the latest album from a Seattle band with a sound all their own, the Paula Boggs Band. They mix in a little bit of everything for a delicious audio blend they like to call Seattle-Brewed-Soulgrass.

The 11-song collection mixes political-minded calls to action with love songs and personal reflection, much of which is given what they call the ‘soulgrass treatment,” of using primarily acoustic instruments and voices. It isn’t all throwback neo-folk though, as the band does venture into blues and roots rock on several tunes, but the center is all about sweet harmonies. The opening track is a Memphis soul styled tribute to the pre-digital era of FM radio and the name sake pop band “Goo Goo Dolls.” The soul grass then kicks in with the light strums of banjo from Mark Chinen and accordion from Paul Matthew Moore to accompany Boggs’ throaty alto on the softly swinging “Gypsy Sapphire,” that segues into the lover’s lament tone poem “Rear View Mirror.”

Neo-soul vocalist Mycle Wastman trades lines with Boggs on the verses and the Total Experience Gospel Choir joins the chorus on the expansive ode to those lost in the Emanuel African Methodist Episcopal Church in Charleston, South Carolina, and powerful alter call to action “Benediction.” The full acoustic treatment is given to a cover of the Bon Iver song “Holocene,” with clever use of banjo, triangle and strings to replace synthetic EDM sounds. Timely topics and questions and a plea to heal the world on the longing track “Peel The Charade,” then the mood lightens for the Dixieland call for unity “We All Fall Down.” The joyous instrumental “Two Daughters,” allows the players to show off their considerable chops. Boggs continues her crusade with the direct to the point message of “The Get Along Song,” and then call for self-examination on the challenging track “Sleep Walking.” Boggs then closes the album with an intriguing notion that music has the power to both heal and hurt you and thus is a fickle mistress and dubs her the “Original Sin.”

Check out the video for “Holocene” below via YouTube.

(Listen below to the album below via Spotify. You can also purchase it at their website HERE and get more info about the band on Facebook HERE.)