Ladies and gentlemen, and all local music enthusiasts, welcome back to the fourth annual outing of our year-end daily local music spotlight, 100 Bands in 100 Days, where every day until December 31st, we’ll be showcasing a new band or artist on the cutting edge of the Northwest, presented by Verity Credit Union. Make sure to check the #100Bands100Days hashtag at Twitter daily to stay on top of all the bands featured, and make sure to follow Verity on Twitter and NW_Music_Scene as well. Some days the featured act could be an established and locally-adored Northwest-based musician and other times they could be a band with a small following that just hasn’t had their deserved time in the sun yet. Either way, we’re fairly confident you can come away from this daily segment with plenty of new favorites. Those of you sensitive to heaviness had better be careful, because today we’re looking at a rock band keeping Seattle up late at night, Warning: Danger! 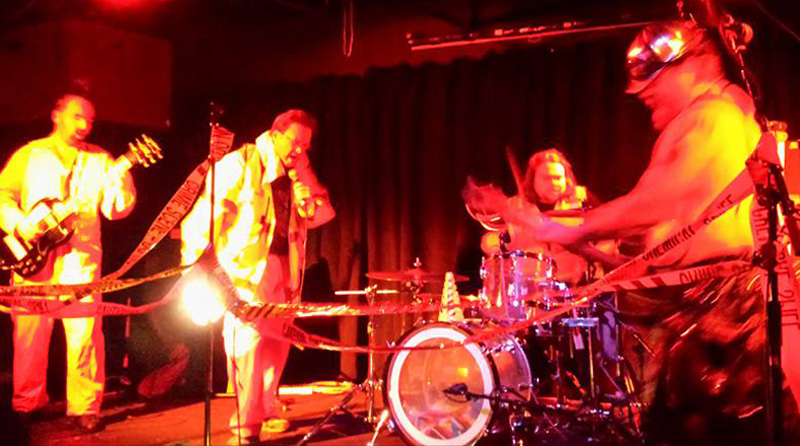 Warning: Danger! like to keep things old-school; not in their recording and production, but in their ability to hearken back to an earlier time in punk rock, a sillier, louder time when punk didn’t take itself too seriously. Their crunchy, savage guitar riffs and generally uncompromising rock sound can be traced back to bands like the Dead Milkmen, the Sex Pistols and the Dead Kennedys, but their witty sense of humor cuts through their songs like a knife. Or maybe more like a shovel to the face. The band may promote safety and precaution in their image and antics, but their songs feel anything but composed and well-mannered.

Since their formation in 2007, Warning! Danger has kept Seattle on its toes pretty consistently. The band has a knack for releasing one hard-hitting album after another that helps build their reputation as one of Seattle’s hardest rockers. On the band’s 2008 debut Sings the Soothing Songs of Safety, the band preferred to keep things nice and in the red, with songs like “I-5 Crunch” and “Avalanche!” sounding just as destructive as their names would suggest. Given the level of intensity the band manages to hit so seamlessly, it’s no surprise they’ve shared the stage with the likes of Green Jellÿ and The Spits.

If you’re on the hunt for a new rock band that will melt your face off, but immediately teach you how to treat it and be safe in future situations, look no further than Warning: Danger!

(Listen to the band’s latest release, Watch for Rock, below; you can keep up with them via Facebook and their official website.)