Ladies and gentlemen, and all local music enthusiasts, welcome back to the fourth annual outing of our year-end daily local music spotlight, 100 Bands in 100 Days, where every day until December 31st, we’ll be showcasing a new band or artist on the cutting edge of the Northwest, presented by Verity Credit Union. Make sure to check the #100Bands100Days hashtag at Twitter daily to stay on top of all the bands featured, and make sure to follow Verity on Twitter and NW_Music_Scene as well. Some days the featured act could be an established and locally-adored Northwest-based musician and other times they could be a band with a small following that just hasn’t had their deserved time in the sun yet. Either way, we’re fairly confident you can come away from this daily segment with plenty of new favorites. Today we return to Seattle to shine a light on one of the scene’s staple stoner rock outfits, Eight Legs to Nowhere. 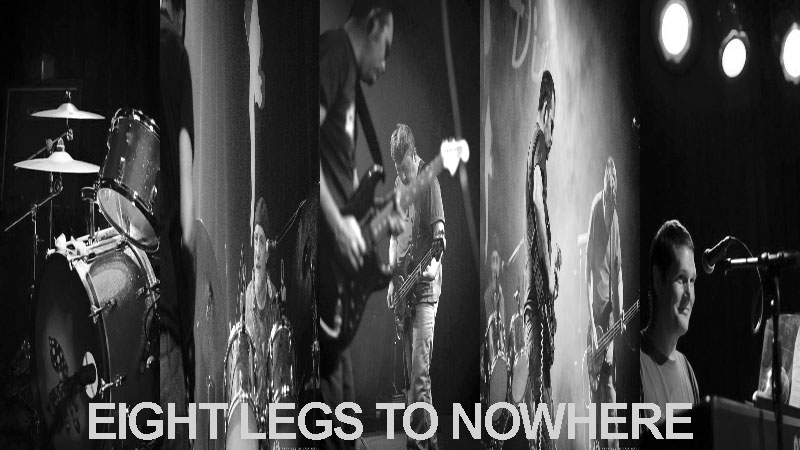 Eight Legs to Nowhere aren’t here to waste your time. Formed almost ten years ago, the rock band prides itself on songs that are just as rough and noisy as they are concise and direct. Elements of Joy Division’s dark, brooding atmosphere and noisy indie rock acts like Superchunk and Sebadoh ring through in Eight Legs to Nowhere’s sound, but the band uses these influences to craft a style that’s entirely their own. The band’s lengthy stride and tenure in music shows in their songwriting and performance chops, both live and on their albums. While other bands under the ‘stoner rock’ tag may tend to stretch their songs out past the eight- or ten-minute mark for maximum nodding-out, Eight Legs to Nowhere are here to deliver this same potency in three to five minute chunks of chaos.

Eight Legs to Nowhere’s latest release, 2016’s Hum Inside My Head, is the band’s sharpest release to date, an album which takes the previous sounds presented by 2014’s INK and fleshes them out with even catchier songs, beefier production, and the band’s most stylistic variety to date. They’re the sort of band that will suddenly bust out the Squeeze Box, banjo, or even a lap steel guitar, right in the middle of a hard-hitting rock song and still keep things intense and memorable.

Those of you who like to take your rock music visceral and fun, look no further than Eight Legs to Nowhere.

(Listen to Hum Inside My Head below; you can keep up with the band via Facebook.)