Music fans of the Pacific Northwest, get ready for our fourth annual year-end daily local music showcase, 100 Bands in 100 Days, where every day until December 31st, we’re showcasing a new band or artist you have to know about, presented by Verity Credit Union. Make sure you are checking the #100Bands100Days hashtag at Twitter on the daily to stay on top of all the bands featured and make sure to follow Verity on Twitter and NW_Music_Scene as well. Some days the featured act could be an established and locally-adored northwest-based musician and other times they could be a band with a small following that just hasn’t had their deserved time in the sun yet. Either way, we’re fairly confident you can come away from this daily segment with plenty of new favorites. For day number two let’s feature Zelda Starfire, shall we? 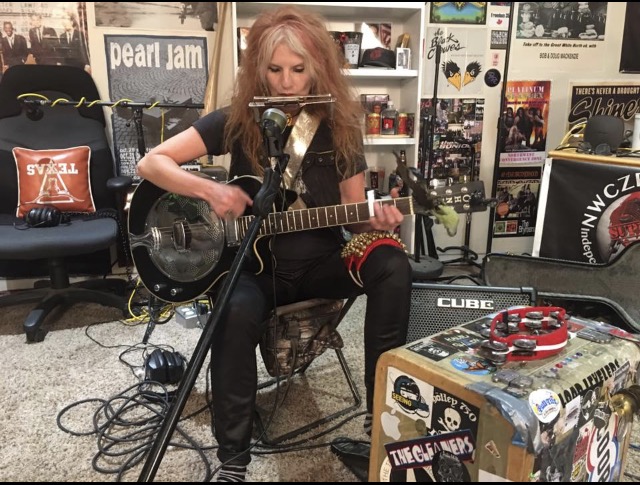 Earlier this year we reviewed a new album called Wommando from Zelda Starfire who’s one of the most exciting artists we’ve heard so far this year.

From our review in June:

Like a blast out of a double-barreled scatter gun, the nine-song album Wommando from Seattle one-woman band artist Zelda Starfire hits you full in the face with grinding guitar, kick drum and caterwauling vocals. Recorded live in the studio by Steve Feasely at his workshop Love Studios, Seattle. Wommando marks both the new reality of indie recordings that are released as a digital album only and a throwback to quick and dirty, low budget records of yesteryear.

Zelda opens with the furious country punk, “Never Drinking Again,” pounding hard on acoustic slide guitar and blowing crude harmonica while delivering the tone of the morning after with the great line “I reek of whiskey, there’s guilt in my hair.” The fever pitch of “Chicken Killin” easily lives up to its title. Starfire refines her gig a notch as she recants the ill-fated tale of Kansas cowboys who hired a water witcher to lead then to water on “Water Witch,” adding some clever finger picking and a June Carter growl to her vocals.

Zelda Starfire is definitely one that we’ll be keeping our eyes and ears on and we’re excited to see where she goes next. You can catch her live on October 21 at Substation in Ballard during Nadafest 2017.

(Listen to Wommando below via Bandcamp and you can get more info about Zelda Starfire on Facebook HERE.)