Music fans of the Pacific Northwest, get ready for our fourth annual year-end daily local music showcase, 100 Bands in 100 Days, where every day until December 31st, we’re showcasing a new band or artist you have to know about, presented by Verity Credit Union. Make sure you are checking the #100Bands100Days hashtag at Twitter on the daily to stay on top of all the bands featured and make sure to follow Verity on Twitter and NW_Music_Scene as well. Some days the featured act could be an established and locally-adored northwest-based musician and other times they could be a band with a small following that just hasn’t had their deserved time in the sun yet. Either way, we’re fairly confident you can come away from this daily segment with plenty of new favorites. Today’s featured artist is HALF SHY. 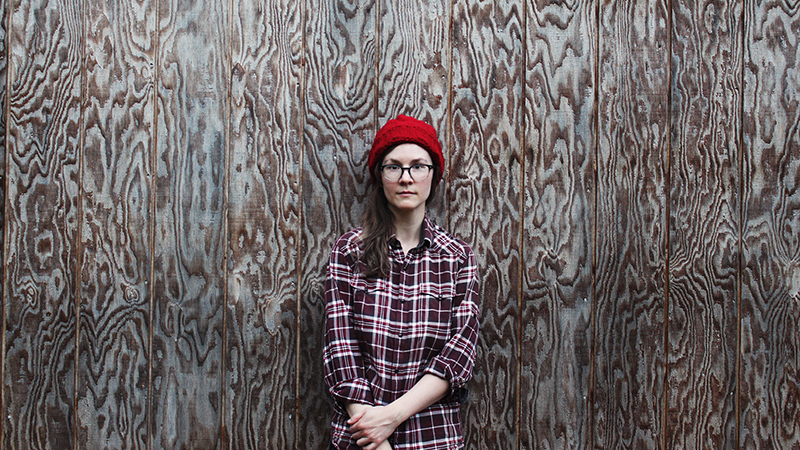 One of the funnest parts of doing this feature is that although we get a ton of stuff sent to us through out the year, during the call for submissions for this feature our email inbox explodes with incredibly talented bands and/or musicians we aren’t aware of. Our offering today certainly has plenty of talent and it would appear the sky is the limit for HALF SHY.  While the music is catchy, fun and energetic, the vocals on this project are what really sells it.

Born in the high deserts of Idaho, grown in dusty garage workshops, and created alone in basement studios, HALF SHY is the indie-pop recording project of songwriter and producer Karen Havey.

Havey might never have been making music as HALF SHY at all had it not been for her brother’s borrowed copy of an early recording software. “I was so shy it wasn’t until I was able to record privately in my basement and nervously hand the headphones over to my friends that I realized I might actually be able to carry a tune,” says Havey.

Listening to the Bedroom Visionaries, it’s not hard to envision that Havey put her heart and soul into this release and then reading through the bio for HALF SHY, she explains a bit more about the progression of her music.

“My last songs were really just me figuring out how to record, taking the limited gear in my bedroom, and releasing it as is. HALF SHY is much more of a concerted effort to really understand the process, editing out what doesn’t move the song in a direction I want to go, and not letting it sit as ‘good enough’. At times it makes me crazy, but I love learning the technical side of music so that it works as a tool rather than fiddling with a bunch of mysterious knobs and frequencies until it sounds halfway decent.”

We can’t wait to see what the future holds for this talented musician. Spend some time with this release and you might just find another northwest artist to love.

(Listen to ‘Bedroom Visionaries’ below via Bandcamp, where you can also purchase it and you can get more info at the website HERE.)